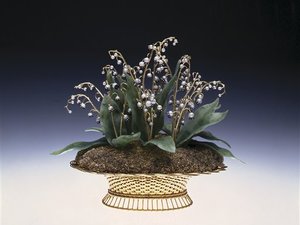 Ornately jeweled Easter eggs designed by Karl Faberge for the Russian royal family are among hundreds of Faberge objects on display at the Virginia Museum of Fine Arts.

"Faberge Revealed" includes imperial Easter eggs and other pieces from VMFA's own collection, along with sculptures and other works loaned from three private collections, making the exhibit the largest public Faberge collection in the United States, said Geza von Habsburg, a Faberge expert and the exhibit's guest curator.

A standout piece is the Imperial Lilies of the Valley Basket sculpture, which represents all aspects of Faberge's artistry in one work, Habsburg said.

"One can see the jeweler's art in the pearl buds and little rosebud diamonds; the stonecutter's art in the nephrite leaves, which seem to be alive; and the goldsmith's art in the gold basket," he said. "And the moss, it's utterly amazing."

It was presented to Czarina Alexandra Feodorovna in 1896, the year of the coronation of her husband, Nicholas II, Russia's last emperor. The work was her favorite, displayed on her desk until the Bolshevik Revolution in 1917. The couple and their children were executed the following year.

The exhibit, which ends Oct. 2, includes six eggs Nicholas presented to his wife and mother as Easter gifts, including the 1903 Imperial Peter the Great Easter Egg, the 1912 gold-and-lapis lazuli Imperial Tsesarevich Easter Egg and the 1912 gold-and-green enamel Imperial Napoleonic Egg.

Commissioned to mark the bicentennial of St. Petersburg, the Peter the Great Egg is crafted of gold, platinum, diamonds, rubies, sapphire and enamel with miniature watercolors on ivory. Inside is a miniature replica of Falconet's Bronze Horseman statue of the 17th-century emperor that rises when the egg is opened.

An imperial egg can fetch $25 million to $30 million at auction, Habsburg estimates. Russian oligarch Viktor Vekselberg bought nine imperial eggs from the Forbes collection in 2004; the Imperial Coronation Egg's purchase price, for example, was estimated between $18 million and $24 million, he said.

Faberge's company became supplier to the Imperial Court after he sold a piece of gold jewelry to Czar Alexander III's wife, Empress Maria Feodorovna, in 1882. He then started his series of Imperial Easter eggs, which subsequently made him famous and forever linked him with the opulence of the Russian dynasty's final days.

With his four sons and his brother, Faberge employed a 40-person design studio in St. Petersburg and 500 craftsmen and other workers to create 150,000 unique objects, distinguishing the House of Faberge as the leading jeweler of the period.

"Each piece was one-of-a-kind, meaning there were no repetitions," Habsburg said. "That sets him aside from any other craftsman or jeweler of his time."

The Bolsheviks destroyed most of the Faberge pieces during the revolution, melting the metal and selling the jewels and stones. Only a few hundred objects remain in Russia, Habsburg said.

The royal family's imperial eggs were confiscated, and eight disappeared during the revolution. Ten are in the Kremlin Armory Museum in Moscow. The Bolsheviks ordered the others sold between 1925 and 1933 through a government agency in charge of art sales; 42 eggs survive and are in both public and private collections.

Because he was a symbol of artistic decadence in the run-up to the overthrow, Faberge and three of his sons fled the country in 1918. A fourth son who remained in Russia was imprisoned. After Faberge's death in 1920, the sons tried unsuccessfully to revive the brand in Paris, Habsburg said.

"But if you think what the '20s were, it was the Art Deco period of flappers and jazz, so Faberge's beautiful things in the French 18th-century style were no longer in demand," he said.

The doomed Russian imperials fascinated many Americans, including Virginian Lillian Thomas Pratt, whose collection was bequeathed to VMFA after her death in 1947. Pratt, the wife of a General Motors executive, scrimped during a slumping economy to purchase items from 1933-45 with the help of New York art dealer Alexander Shaffer. She acquired the Imperial Peter the Great Egg in 1939, and was allowed to chip away at the $16,500 bill in monthly installments from 1942-44, museum accounting logs show.

She also acquired some of her objects from the businessman and art collector Armand Hammer, but some since have been determined to be knockoffs, Habsburg said. The exhibition also displays some of what he calls "Fauxberge" items, including hardstone animal figurines and floral pieces.