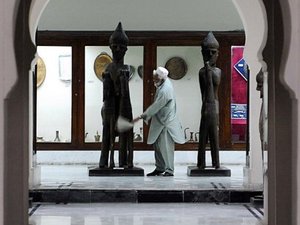 A remarkable trove from Pakistan's little-known Buddhist past has gone on show in New York in an art exhibition that defied floods, riots and explosive U.S.-Pakistani relations before finally crossing the world.

The against-the-odds exhibition, "The Buddhist Heritage of Pakistan: Art of Gandhara," features sculptures that have mostly never before been seen in the United States.

Unveiled this week at the Asia Society, the works trace the dizzyingly complex pre-Islamic history of the Gandhara region located in the northwest of modern-day Pakistan.

But as the exhibition makes clear, Gandhara once was a cradle of culture and art, as well as the target of an endless stream of empires, in a flourishing period that ran from the first century BC through the fifth century AD.

"Despite images of Pakistan as a place of violent extremism, the region has an ancient tradition of tolerance and pluralism," said Asia Society Museum director Melissa Chiu.

The stone carvings and works in gold and bronze mirror influences from as far apart as ancient Greece and Rome, India, Persia and, increasingly over time, Buddhism.

The Buddha figures, including one of just three so-called "emaciated Buddhas" in the world, and the other pieces have survived more than a millennium and a half intact, their mixed styles testifying to cultural fusion and experimentation.

But the tale of how they traveled from museums in Lahore and Karachi to Manhattan is hardly less remarkable than their passage through the ages.

With nine or 10 layers of bureaucratic approval required, it was always going to be difficult, and then negotiations became sidelined in the emergency caused by catastrophic flooding last year.

Next, with acres of paperwork already sorted, the country's government dissolved its culture ministry as part of a shake-up. "We'd had an agreement with the ministry of culture," Chiu recalled ruefully.

An opening for March was planned and abandoned -- an unusual move in the international art world -- as tensions, in part linked to a CIA operative's shooting of two Pakistanis, grew between Pakistan and the United States.

The killing of Osama bin Laden in Pakistan during a May raid by U.S. Special Operations Forces made the hoped-for deal even more tenuous.

Finally, agreement was reached. But even as work began to pack and ship the precious artifacts, the exhibit's fate hung in the balance.

"In Karachi, they had all these riots the week this was being packed," Chiu said. Terrified packers refused to leave their houses and, in the end, "museum staff went around to the houses to collect them."

Chiu called the exhibit "a once in a lifetime opportunity," saying the difficulties in pulling it off should inspire optimism.

"What's interesting is there were so many people in Pakistan who helped, who put their necks on the line to make this happen -- to show Americans another side of Pakistan, its long cultural heritage," she said.

Pakistan's ambassador to the United Nations in New York talked with Chiu every day for months. "Then, he called the president and other ministers to get help."

Among the highlights of the show, which opened Tuesday and runs through October 30, is the extraordinarily carving "Vision of Buddha Paradise."

The stele features a crowded scene not only in relief but carved out, so that multiple details stand almost free of the background from which they have been cut.

Although Pakistan is now overwhelmingly Muslim, the artworks are carefully guarded and revered in their home museums. There's another echo that lives on, Chiu noted with a mischievous smile: the twirl mustaches sported by many in the sculptures.

In Pakistan today, "everyone has a mustache. It's de rigeur for men."