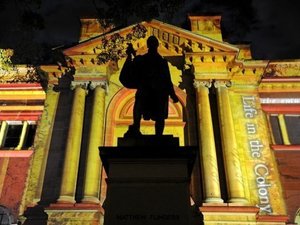 The New South Wales State Library in Australia launched a "search and rescue" mission on Friday to revive lost indigenous languages, using the letters and diaries of early British settlers.

When the British first arrived on the shores of what became Sydney Harbour in 1788, an estimated 250 local languages were spoken in Australia, but many have been lost.

With the support of Anglo-Australian mining giant Rio Tinto, the library will attempt to bring some back, acting chief executive Noelle Nelson said.

"Fragments of these languages can be found among the letters, diaries and journals of British naval officers, surveyors and missionaries held in the State Library's unrivalled collections," Nelson said.

"These first-hand accounts are often the only surviving records of many indigenous languages."

The three-year "Rediscovering Indigenous Languages" project aims to identify as many word lists as possible in the library's collections, and make them available to the relevant indigenous communities.

"The project will introduce and reconnect people with indigenous culture," added Nelson.

Australia's original inhabitants, the country's most impoverished minority, are believed to have numbered around one million at the time of white settlement, but are now just 470,000 in a nation of 22 million.

A government survey in 2004 found that only 145 indigenous languages were still spoken in Australia and about 110 of these were severely or critically endangered.