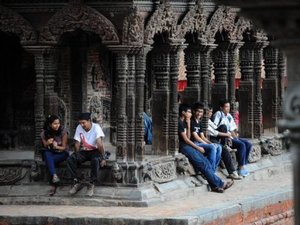 Nepal will host its first international literary festival this September which will shine a global spotlight on writing from the Himalayan nation, festival organizers said Friday.

The three-day Kathmandu Literary Jatra (festival) will be staged in historic Patan Durbar Square, a UNESCO World Heritage Site near the capital Kathmandu, from September 16-18.

The Kathmandu Literary Jatra was inspired by India's Jaipur Literary Festival, Asia's largest writers' event, held each January in India's "pink city" of Jaipur in the northwestern state of Rajasthan.

"India is becoming a publishing hotspot. Living next door, we thought it's a good time for Nepali literature to come out and showcase its talents," festival director Suvani Singh said.

The Kathmandu festival is being supported by the co-founder of the Jaipur festival, Namita Gokhale, a prominent Indian author who will serve as an adviser.

"There is a lot of writing going on in Nepal, especially after the end of the (Nepal Maoist) civil war and an event like this will help draw attention to what's happening here," Singh told AFP.

The young republic, sandwiched between Asian giants China and India, has a rich literary tradition, but few outside readers are familiar with its writings because most works are published in Nepali.

The festival, expected to be attended by up to 10,000 people, will feature interactive sessions on such topics as "South Asia's identity portrayed in literature", "language divide" and conversations with authors.

Among those on the guest list are British writer Patrick French, who wrote "India: A Portrait", Mohammed Hanif, Pakistani author of "A Case of Exploding Mangoes" and Tarun J. Tejpal, editor of investigative Indian news weekly Tehelka.