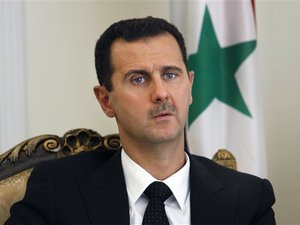 Candidates for Syria's presidential election can begin registering on April 21, when the date for the vote will be announced, a government source told Agence France Presse on Thursday.

"On Monday April 21, the Council of the People (parliament) will meet to open registration for presidential candidates and set a date for the election," the source said.

Syria's government has insisted it will go ahead with presidential elections this year before the end of President Bashar Assad's term on July 17.

But it is unclear how it will do so during a raging civil war that has killed more than 150,000 people over the past three years, displaced nearly half the population and seen the regime lose control of large swathes of territory.

The vote will be Syria's first multi-candidate elections, after a new constitution did away with the old process of presidential referendums.

Assad has all but said he will stand, and is expected to easily win the vote.

New electoral regulations, including a requirement stating that candidates must have been living in Syria for the last decade, will exclude prominent opposition figures who live in exile.

The government's plan to hold the vote has drawn criticism from much of the international community, with U.N.-Arab League peace envoy Lakhdar Brahimi warning it could jeopardize further peace talks.

Syria's opposition has insisted that Assad can have no role in the country's future and his departure from office is one of their key demands.

@josephani; were you not calling for boycotting Naharnet yesterday? What brings you back. Happy Easter kfarhounkhan!

I read before you saying you support Geagea for president... did you change your mind...

he is the old joe bustani, an alawi who got banned several times.

You are a traitor. Lebanon is Lebanon. And Syria is Syria. Fashar 3a ra2ibtak and all 2wmiyeh that we will ever be part of Syria. Eat your heart out.

i dont give a damn about them as much as i dont give a damn about you and your 2wmeh ideals.... the difference is they eat other peoples hearts... while you can eat your own... and be my guest in going to Syria and fighting for your beloved president instead of just sitting here and typing... oh i forgot... you are 2wmeh... all talk...

Naharnet forgets that there is another clause that stipulates that any presidential hopeful must have the endorsement of 30 or 35 members of the council of people. Which is all Ba'ath. How funny is that.

Bashar el assad is not some one to support, but unfortunately, this syrian alawite, is on the right track of history.

Bashar el assad is not some one to support, but unfortunately, this syrian alawite, is on the right track of history.

You have us fooled veritas1. I believe in all those MSM lies also. Everything you say was proven to be Saudi western backed invasion on Syria.

There is no 'Syria;' there are only territories, controlled by various forces. They can have their farce elections, but the Butcher will end up being president of a few territories that his stooges control.

Face it, the old Syria is gone, and ain't coming back,

lol! a real parody of elections when everyone knows who will be elected! LOL

Really Josephani? You want to re unite Lebanon with it's mother land Syria? We have had at least seventy years of diverging histories and you still think we are the same people? Baffling really, but you are entitled to your views.

@jnoubi I'm not sure which part of the south you're from but I can tell you that in Jezzine, where I'm originally from, the Lebanese flag flies high and always will