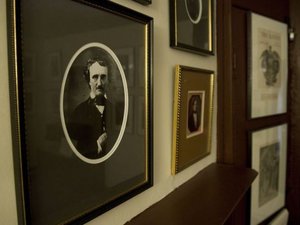 The house where American writer and poet Edgar Allan Poe lived in poverty for several years in the 1800s, and which now serves as a museum, could soon be forced to close its doors for evermore.

For the second year running, the house, situated off the beaten path in a poor part of Baltimore, in the eastern U.S. state of Maryland, has received no funding from the city, which has its own financial woes.

Baltimore's deficit snowballed to $120 million for the 2011 fiscal year, leading the city to tighten its belt and decide to fund only essential services.

To the small brick house that Poe lived in from 1832-1835 with his aunt, grandmother and cousins Henry and Virginia -- who later became his wife, when she was 13 and he 27 -- the funding cuts represented a loss of $85,000 annually, or almost all of the museum's operating funds.

The museum has remained open to the public thanks to fundraising events and donations from Poe fans, and there is enough in the kitty to keep it up and running until the end of June next year, said curator Jeff Jerome.

Among the modest exhibits in the museum are crockery and glassware from the home of the Allans, the wealthy Virginia couple who took Poe in after his mother and father died; the notice of Poe's death in 1849, at the age of 40; a portable writing desk, and several paintings and prints.

One blurry photo on the wall shows a mystery man who for 60 years on Poe's birthday -- until 2009 -- left three roses and a bottle of cognac on the writer's grave, situated around a mile from the house on North Amity Street.

"We don't have a big collection," said Jerome.

"You get a sense of the poverty Poe was suffering through, and people appreciate that. You can see the walls that Poe looked at; you walk on the floor Poe walked on; you can go into the room Poe slept in -- that's the experience we want people to have."

Poe wrote several short stories while he lived in the brick house in Baltimore, including one that won him $50 in a contest, a sizeable sum at the time.

One of the small museum's downfalls is the fact that it sits off the tourist trail in Baltimore, in an underprivileged neighborhood in a city hard-hit by the financial crisis.

A petition to keep the museum open has gathered 5,900 signatures from around the world -- more than the 5,000 people who every year visit the house where the author of The Fall of the House of Usher, The Tell-Tale Heart, The Pit and the Pendulum and the narrative poem, The Raven, spent part of his short life.

"It would be a terrible and irreversible mistake to close the house," commented Ricardo from Brazil on the petition.

"This simple house is no less than an American cultural treasure, which must be maintained, wrote Michael from the U.S. state of Georgia.

A limited edition print of a raven by a local artist is being sold to raise money for the house, a local restaurant has launched a fundraising operation called Pennies for Poe; and the city of Baltimore has hired a consultancy to come up with a business plan to make the museum financially viable.

And Poe fans are optimistic that a soon-to-be-released film called "The Raven," inspired by Poe's poem and starring actor John Cusack as the mustachioed 19th-century author, will help to save his little brick museum in Baltimore.

"It's going to be great publicity for Poe," said Jerome.