Aoun: Our Country is Not a Pawn in the Hands of False Witnesses or Questionable Justice 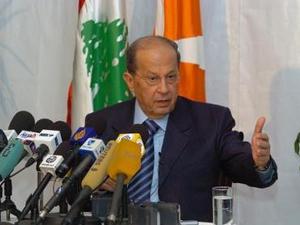 Free Patriotic Movement leader MP Michel Aoun questioned on Tuesday the Special Tribunal for Lebanon's credibility, saying that accusations have been directed against Hizbullah of being behind former Prime Minister Rafik Hariri's assassination after the July 2006 war failed in destroying the party.

He said after the movement's weekly meeting: "We have never seen a country die because of one individual or one political line of thought."

"Resolving the false witnesses case will not be necessary after the indictment is released because we want to find out who is responsible for them and not place the witnesses in jail," Aoun stated.

"There can be no negotiating on the indictment once it is issued … No one will attack people, but every one will carry a weapon and will find an opponent within his society, in some areas the army will be his opponent and in others someone else," Aoun stressed.