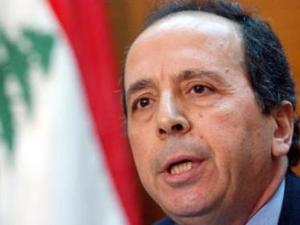 A statement issued by Sayyed's office said the two-hour meeting in the morning touched on “the outcome of the Syrian army's military operations in terms of cleaning Syrian areas adjacent to the Lebanese border in Akkar and the Bekaa from terrorist groups.”

It said such a move would “allow the Lebanese Army to better control the border on the Lebanese side, in coordination with the Syrian authorities.”

“The developments in Syria are moving forward on two tracks. The first is the continued war on terror, which is represented by the armed and takfiri groups, and the second is encouraging and speeding up national reconciliations,” Sayyed said after the meeting.

“Constitutional junctures, including the presidential vote, are a sovereign Syrian issue and they cannot be impeded by any incidents, similar to what happened in many countries witnessing difficult situations, such as Iraq, Tunisia, Libya, Afghanistan and others,” Sayyed added.

Syrian forces have recently seized control of most towns in the strategic Qalamoun region near the border with Lebanon.

A statement issued by Sayyed's office said the two-hour meeting...........
If you did not know any better you would think he is the current Security Chief of Lebanon. If you know a lot, you know that Assad's disregard to Lebanon's Sovereignty is as always, none-existent. This is just one small demonstration of Assad and M8 disregard of the official Lebanese State. May the Takfiris, HA and Assad all disappear so normal Lebanese people and Democratic Lebanon can rise.

in what capacity and representation this shmuck of a traitor is talking on behalf the army or remotely on anything lebanese? this guy should be captured on the border for high treason .....filth of the earth

Another shinning example of an Assad M8 slave... maybe the Killer giraffe will reward Sayyed for all his years of service by nominating him as a representative to UNESCO.

Why was Sayyed riding in the car with Samaha, bringing bombs into Lebanon from Damascus?

Where's Fifi to come and defend Sayyed like he always does?

Please explain how someone who files a lawsuit is "winning" before the lawsuit is concluded? You win or lose a lawsuit at the final verdict, PERIOD! Sayyed has not won anything, and he never will.

In the end, they will all stand in a very calm line in front of the us embassy awaiting a visa similar to Ali Eid and his son.

This is only half a joy. Ful joy is when we get a Salafist/HA free Lebanon

You like his political ideas or not, this Sayyed was the main actor in reunifying the Lebanese Army in the 90s and he was the one who build the most modern and efficient institution the Amn Ãam. Ask Patriarch Sfeir and the Maronite bishops who praised him for these achievements in 2004...

of course abbas of course

You mean Geagea or Zouheyr Siddik ??