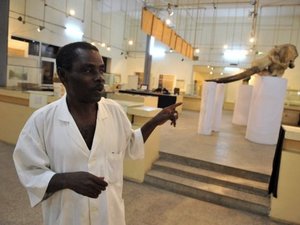 Bullet holes pock the vault door and empty display boxes litter the showroom floor of Abidjan's Museum of Civilization, robbed of 100 ancient artifacts under the cover of deadly conflict in April.

"A piece of our history has been wiped out," museum director Silvie Memel Kassi laments of the collection's lost crown jewels, some dating back to the 17th century, that may now be melted for the gold.

Worth an estimated three billion CFA francs (4.5 million euros, $6.5 million) but irreplaceable, the looters made off with masks, sabers, crowns and gold-handled fly swatters -- objects described by the museum as "authentic, unique and rare".

"I had dreamt of leaving a museum of reference for future generations," Zoko Djowa, the museum's curator for the last 30 years and just months from retirement, said bitterly as he walked around the devastation.

Opened by the then-French administration in a white, colonial-style building in 1942, the museum could not have been worse placed during the conflict that engulfed Ivory Coast's economic capital after a disputed November vote.

In Plateau, the neighborhood housing the presidential palace, the building also borders Camp Gallieni army headquarters and came under fire from both sides to the four-month conflict.

Fighting ended on April 11 with the arrest of strongman Laurent Gbagbo, who sparked the conflict by refusing to concede defeat to Alassane Ouattara.

Shelling left a large hole in the museum facade.

Inside, the shattered state of the exhibition hall would break the heart of any art lover hoping to see the once rich collection of artifacts telling the story of the peoples of Ivory Coast.

Bullet marks have been left on the double glass that used to enclose sabers used by the royal Agni people from eastern Ivory Coast.

In the middle of the room; the massive, hundred-year-old skeleton of an elephant -- the national emblem -- towers over the few masks and statuettes left of the once proud collection.

Among the items lost: pendants worn by the central Baule people in the seventeenth century, statuettes of the western We and northern Senufo tribes, crowns and fly swatters with solid gold handles from the central and coastal regions, and sacred masks from the Dan people in the west.

While the pillagers failed to reach most of the estimated 11,000 items locked up in the vault, they did make off with the museum's flagship collection.

"All of Ivory Coast" was exhibited there, Memel Kassi told Agence France Presse in her small office, surrounded by traditional masks. Each of the stolen objects "taught us something about its culture, its civilization, and its beliefs".

Without holding out much hope, the museum had issued a search notice for the plundered items via cross-border policing organization Interpol, and urged the public to help.

But chances of recovering the items are slim, said Jules-Evariste Toa, a communication professor at the University of Abidjan.

"One can melt the gold or start a private collection. We fear never to see the items again," the once-regular museum visitor told AFP.

Now closed to the public, the museum -- which has seen its visitor numbers dwindle in recent years -- will have to stretch its meager 76,000-euro budget to cover vital refurbishment and security improvements.

But by far the worst consequence of the looting, say Ivorians, is the loss of patrimony invaluable to helping forge a common national identity as the nation embarks on reconstruction after a decade of crises and tensions.

"Ivory Coast is losing its points of reference with the disappearance of these pieces," said Ivorian poet and writer Paul Ahizi, describing the theft as "a desecration of the spirit of (our) ancestors".

"The country will have a problem defining its own identity and spirituality," he said.