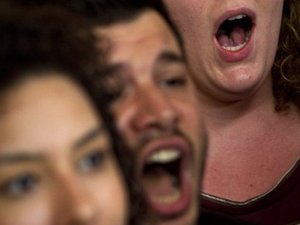 Twenty young opera singers from the West are in Beijing to learn to perform in a new language: Chinese.

Their monthlong training culminated in a performance this week at the National Center for Performing Arts.

The pilot program was co-sponsored by the Chinese government and overseas groups. Organizers hope it will inspire more Westerners to sing in Mandarin and promote modern Chinese opera globally.

Chinese composers have written a number of Western-style operas in recent years. The country boasts about 50 performing arts centers, and Western operas are regularly performed in the capital.

For the government it's an opportunity for cultural diplomacy. Beijing also announced plans recently for a global tour by a Chinese version of the three tenors.