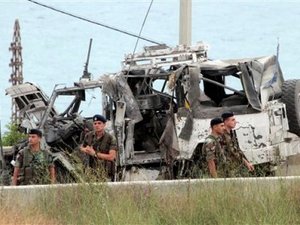 He told Akhbar al-Yawm news agency that the international force was not informed of any possible French withdrawal.

In addition, he said that none of the countries participating in UNIFIL received such a message either.

This issue is a priority and enjoys UNIFIL’s complete attention, he said.

Sarkozy had warned Lebanon that Paris would consider pulling its troops from UNIFIL if it comes under attack again.

In a letter sent to Suleiman and Prime Minister Najib Miqati, Sarkozy said: “If the July 26, 2011 attack takes place again then France would wonder whether there is any reason to keep its troops to confront the dangers that the host country is not dealing with appropriately.”

The letter dated August 3 was posted on the French embassy website in Beirut on Thursday.

“It is important to take quick measures to guarantee the safety (of peacekeepers) particularly on the road that links the north to the south,” Sarkozy said.

Despite his stern warning, the French president expressed readiness to consolidate cooperation with the Lebanese army that is deployed in the South.

On July 26, three French U.N. peacekeepers were wounded in a roadside bombing in the southern city of Sidon, and another three suffered hearing problems.

Nobody claimed responsibility for that attack, which targeted a UNIFIL jeep on the main highway linking the capital to south Lebanon, where the 12,000-strong force is deployed.