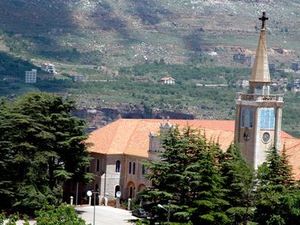 Ninety percent of participants in a Christian meeting held Friday at the summer seat of the Maronite patriarchate in Diman favor the implementation of a proportional representation law in the 2013 parliamentary elections.

According to information obtained by Naharnet, the participants in the first meeting for the so-called preparatory committee for studying the electoral law “reached a 90% agreement on adopting the proportional representation law and there is an intention to hold another meeting, away from the media spotlight, to discuss the electoral law and prepare for a broad meeting aimed at reaching consensus over the text of a draft law.”

A statement issued by the Maronite patriarchate said “the meeting was dedicated to discussing the issue of the electoral law, and the conferees demonstrated the various suggested draft laws and their viewpoints on the topic, stressing the importance of reaching an electoral law that provides the best confessional representation for all Lebanese communities.”

What is civil society? New party?

Good for them. At least they agree on something...

The Islamic republic of Lebanon will be forced, english and French will be banned and no more talks about voting reform. Hezbollah is the only power for terrorism.

@Muhamad... you are an idiot. The new majority foiled a plot by the corrupt March 14 losers to turn Lebanon into another Saudi Arabia. A glorious day when the corrupt scum, Rafik Hariri, was murdered!

the civil war is coming soon . the destruction of lebanon is imminent.assad will destroy lebanon one minute before he falls. he said it many times in the past.
many people will die this time even more than the first civil war. bala mislim bala maseehy. you people as long as you are holding on to religions you are going to regret it. The whole world does not care about religions anymore exept in the middle east. you will allways have wars and no peace.the jews divided you and succeeded. they will never let you live in peace. so please stop the bull shit on here and stop attacking each other over religions. There is no God if there is one let him show up and save the poor people starving in the world.If there is a God let him stop the wars. why doesint he show himself to his people? if there is a God why are there bad people on earth?

Lacelot Christains arnt the minority if you get rd of your filthy Palestinains, those dirty stinky dog Syrians and of course all those grubby Iranians.We are majority outside and inside of lebanon and who actucally own land in Lebanon.The only land all you grubs own is the land that was stolen.Thank you

Lancelot
proportional representation in small individual districts is best for Christians and minorities.

But Berri-Nasrallah are pushing for proportional representation in one large single district diluting any Christian or minority vote that is why Jumblat is against it in principle. The Shiites have been angling for a "مثالثة" since 2001, they like to play the numbers game.

How can naharnet accept such comments by this racist mansour?? Mansour, neither Palestinians, Syrians nor Iranians are included in demographic statistics on Lebanon, only lebanese are. All statistics show that the Muslims make up about 73. The maronites are the largest christian sect but still a minority when compared to all lebanese. And maronites are a minority when looking at the expats as well unless of course you count the syrian maronites in Latin America who emigrated from Syria at a time when there werent even a lebanon 100 years ago? So are they lebanese even though they have nothing to do with lebanon? in which case then surely the muslim syrians in lebanon are more lebanese than them ;) Stop spreading hate and strife. Racism is so 70:s. Had you been a majority then lebanon would have been in your hands by now.

Ali, Ayatollah Sayed Mohammad Hussein Fadlallah was born in Iraq to a family of Lebanese expats who had emigrated there from what was still called Syria but was still considered Lebanese, please afford the Christians expats the rights to citizenship given to him, unless you think that Shiites have more rights than the rest of us..