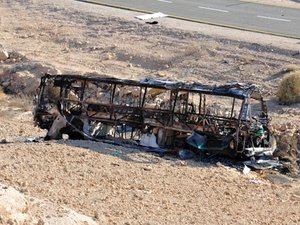 Lebanon, the Arab member of the U.N. Security Council, on Friday blocked a statement which would have called deadly attacks in southern Israel terrorism, diplomats said.

The move brought criticism from the United States which said the terrorism label is a "standard" Security Council description after such an attack.

The U.N. Security Council regularly uses the phrase "terrorist attack" to condemn such acts around the world. Lebanon opposed the use of the phrase this time because one of the buses was carrying Israeli soldiers, diplomats said.

Lebanon had also wanted a reference in the statement, or a separate statement, which condemned Israel's expansion of settlements in Palestinian territories which were announced this week.

A council statement requires unanimity to be passed.

"This is standard language on terrorist acts, which this council has adopted many times," U.S. deputy ambassador Rosemary DiCarlo said of the blocked draft statement.

"We think the council has to speak out on this issue. We find it regrettable that because of one delegation we could not issue that in a timely manner," she told reporters.

"It is outrageous that the Security Council did not clearly condemn the deliberate and appalling murder of many innocent Israeli civilians, which occurred yesterday in a series of coordinated terrorist attacks," Prosor said in a statement.

"It is no coincidence that Lebanon -- the only member of the council that obstructed this statement -- is itself dominated by a terrorist organization," he said referring to Hizbullah.

Palestinian envoy to the U.N., Riyadh Mansour, said "we condemn the killing of innocent civilians regardless of where they are." But he said the council should also condemn the deaths of civilians in Gaza and the Israeli settlements.

"It is very unfortunate that the Security Council was unable to reach a common understanding in a balanced way," he told reporters.

yes unfortunately we are run by a terrorist country Hisballah! for once i have to agree with the Israeli envoy!

thats what happends when you give a terrorist dominated government like Lebanons a seat in the security council. Obviously the bus was full of non-combatants on holiday, if this is not terrorism, then what is.

Can't believe that we agree with some of Israel's comments! It is true it is Terrorist Hezbollah taking the decisions today on behalf of Lebanon...That was a terrorist attack on Israel (not saying that Israel did not do the same in Gaza) but Lebanon should have signed it

Ok, if one of the buses was filed with soliders, why not condemn the act that killed the bus filled with citizens? Continue embarrassing us please Hezbollah....even the Palestinians called a terrorist act!

For once we did the right thing: It is quite obvious this is a terrorist act and no one is arguing it, but it is also necessary to call the Israeli strike against civilians as crime against humanity. Also the theft of land has to stop and the UN has to condemn it. As much as I dislike HA and its supporters I am proud that Lebanon is the country that was able to indicate to other civilised country that Israel should not be immune to criticism and should also be condemned along with the criminals who attacked those two buses.

Hezb Ebola is trying to thrash Lebanon's International relations and reputation through the tool it has in the current and past Foreign Ministries, it consumes Lebanon's political credit. Just like a parasite feeds on its host's blood. Of course the ones that are quick to portray this behaviour as Lebanon's have to be called into question since they know fully well that this is not the Free real Lebanese people's will but is clearly the Iranian criminal regime and the Assad regime one in order to divert attention from the daily Genocides happening daily in Syria and Iran while using Lebanon as the mail box again. This is indeed and without a shadow of doubt a terrorist act that has to punished severely.