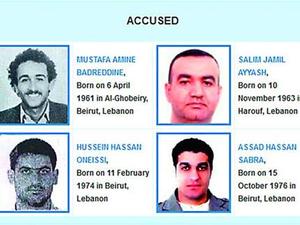 One of the four Hizbullah members accused of involvement in ex-Premier Rafik Hariri’s assassination has said that the Lebanese authorities would have arrested him if they wanted to.

"I don't care about the indictments. Let them come to arrest me," the man told TIME in an exclusive interview, which he gave on condition of anonymity despite having been publicly named by the Special Tribunal for Lebanon among the four suspects.

The STL indictment alleges the plot's mastermind is Mustafa Badreddine, a Hizbullah commander and the suspected bomb maker who blew up the U.S. Marine barracks in Beirut in 1983, killing 241 Americans.

The other suspects are Salim Ayyash, also known as Abu Salim; Assad Sabra; and Hussein Oneissi, who changed his name to Hassan Issa.

“The Lebanese authorities know where I live, and if they wanted to arrest me they would have done it a long time ago. Simply, they cannot,” he said.

During a recent conversation with a Hizbullah source, the TIME reporter found himself introduced to the suspect who arrived alone aboard a scooter at the home of his Hizbullah comrade. While discussing the indictments, he revealed his true identity and confirmed it by showing an old ID card, but agreed to be interviewed only on condition that neither his nor the location be revealed.

The suspect said Hizbullah would have turned him over from the first day to the so-called international justice if he was involved in Hariri’s Feb. 14, 2005 assassination in a suicide truck bombing at the Beirut seafront.

Time said that the four accused Hizbullah men are rumored to be living openly and without fear of arrest in areas under Hizbullah’s control.

When the suspect was asked why he agreed to the interview, he said: “I want to send a message to the world that I wasn't involved in the assassination of Rafik Hariri and that all the charges attributed to me are empty.”

The suspect played down the circumstantial evidence in the indictment such as mobile phone records.

When asked where he was on the day Hariri was assassinated, the suspect said: “I was carrying out my (military) work and I cannot reveal where, but I can prove that I wasn't in the area of (the) Saint George (Hotel), the place of the assassination, and I was at least an hour-and-a-half away from that area.”

The suspect accused Israel of assassinating Hariri, saying the STL should “go to Israel which has the first and only interest in the killing of Hariri.”

“Can't you see that the only beneficiary from this assassination is Israel and its allies?” he asked his interviewer.

@small.axe...they are SUSPECTS you idiot. SUSPECTS!!!

Didn't PM Miqati tell CNN that none of the 4 were in Lebanon...and that if they were, they would be arrested????

Time to make good on this promise Najib!

Why does he insist that the Lebanese know where he is but yet requests to keep his location and name hidden? Another of hezbollah's media mind games. Funny, they distrust western media but yet resort to western media to spread their propaganda as so to giv legitimacy to their bone headed claims :) were not as stupid as ur followers ya Hassan....

Also in the interview he claims innocence yet knocks down the idea of apearing in court to defend himself...who does that?

Send Mr Charbels' convoy to pick him up....Unfortunately Charbel is being paid by Hisballah too so he can make all sorts of stupid excuses! What a shameful character Charbel the minister is! What a joke guys, incompetent crooks running our country!

I fully agree with all the above comments. I only would like to add something...the hezb always comes up with this same sentence “Can't you see that the only beneficiary from this assassination is Israel and its allies?”
Well, that's easy to say now, but 6 years back, NOBODY could have imagined where this assasination was going to take us. No one could have imagined the complex scenarios, the implementation of an international tribunal, the incredible retreival of complex telecommunication data, etc...
If Israel had executed Hariri, they would have planted evidence pointing out to Hezbollah in a much direct and efficient mater...

Amazing how the Time's reporter could so easily access and interview a suspect in Lebanon when the Lebanese government declared that none of the 4 accused is in Lebanon!
If he was so innocent he should surrender to the court and prove his innocence while unveiling the alleged israeli conspiracy that Hezbollah seems to have so much evidence of.

we have had enough of hezbollah already , it's about time we live in a country free of such venomous militia , i respect mr. jaejae for his words today , he really is a man of principles .

Haha such a joke. Read this 3 times and you understand why his arguments have all been prepared before...well studied and typical Hezbollah comments. Anyway if he was involved or not, Hezbollah was definitely involved in the terrorist murder of Hariri,,,after all that the Hezb job, they're just doing their duty as a terrorist group!

“It’s not logical for us to search for the accused for 30 days and then for one of them to appear in an interview,” Charbel said."

Charbel did you look where he lives 'cause tha's where he is is he says so. You make Inspector Clouseau look like Sherlock Holmes.

@ slash: yes yes, but may I ask, they will be replaced by what and whom?

Yup there it came....the long waited "blame it on Israel" jibbirsh, hiding like his towel head mullah....bragging to be brave, but nothing but a chicken coward

ALL 7 Above have one thing in common (Anti-Syrian regime regardless of their religion), therefore Israel will not favor anti-Hizb and anti-terrorist to go away. Get that into your thick head and look how the Syrian people live in Syria which is the same way as they wanted the Leb people to live. Follow the regime or else you will disappear.

Daniel yes ofcourse he did BUT does he have the BALLS to follow through!!!
No sweet way, the guy is under the thumb of Tehran...

bigdig
what do you mean no trace

Miquati, Berri, and Nasrallah are all hiding the know whereabouts of fugitives from the the court the country is bound to uphold. There should be indictments for all three for hiding fugitives. The Miquati government will fall very soon. Not to mention his dealings with Assad.

So you all agree on the same idea. How predictable. After all it's march 14 news source. Commenting the same thing is like not commenting at all.

How is it that the CIA hasn't put a bullet in Badreddine's skull years ago? They really should stop being such pussies and take him out if they think he killed their guys. Rid us of his presence.

Misdirection
we also all agree that the earth is round yup it is, and no we're not gonna try to convince you of that so be careful you don't fall off the edge next time you go swimming, bye bye.