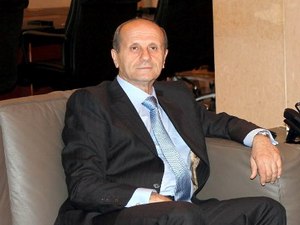 Interior Minister Marwan Charbel has said that the TIME magazine report should be considered by the general prosecutor’s office as a notification.

TIME has interviewed one of the four suspects wanted in connection with ex-Premier Rafik Hariri’s Feb. 2005 assassination. The magazine didn’t identify the suspect.

Charbel told An Nahar daily published Saturday that the general prosecutor should investigate whether the interview and the statements made by the suspect were true and then take the next step.

“It’s not logical for us to search for the accused for 30 days and then for one of them to appear in an interview,” Charbel said.

“Had we known his whereabouts, we would have gone and arrested the suspect,” the minister told Future News on Friday night.

Charbel who calls himself a minister for justice is an absolute disgrace to himself, his family and Lebanon! He needs to be locked up and sentenced as such. We do not want crooks like Charbel running our country, No thanks minister go dig a hole in the ground somewhere and hide!

Charbel who calls himself a minister for justice is an absolute disgrace to himself, his family and Lebanon! He needs to be locked up and sentenced as such. We do not want crooks like Charbel running our country, No thanks minister go dig a hole in the ground somewhere and hide!

yeah right charbel...lol.. you are gona go and arrest the suspect!?! are you gona defy your masters in da7ye? as for the bald miqati: kharjak ya 7mar.. why did you accept being such an impotent slave PM for the hizzies?? i also heard that your moneys might also be targeted by the sanctions.. i am sure you did not expect any of this when you saw the opportunity to be a PM..too bad...i really feel sorry for you but also ala la yredak lol

I am proud as a Lebanese citizen to have men like Marwan Charbel to represent me. Really, his declarations are always full of conviction, details, passion, precision...his action plans are so methodic, full of technique,...so strategic...what a great man........
Seriously, If this is the caliber of an Interior Minister, then we should give up on this country. This person does not have what it takes to be the janitor of the parliament...

Janitor of the parliament is too good for Charbel. No do not give him a public job ,let him go and rob someone else...

marwan buddy, your dragnet should've covered more than the kitchen and hallway in your house numbnut.

He's making a fool of himself everytime he opens his mouth. Almost more than Aoun

Mr Marwan Charbel,who are you trying to kid?You and the rest of your incompetent team (march 8)treating the Lebanese people with contempt.

The Criminal Iranian Organization will pull as many so called "polticians" and "officials" down with it as it is brought down, no wonder why no one wanted to participate in this this Vichy government, its nothing but a group of wanna bees whose political lives are being consumed at a neck-breaking pace by the Iranian tool Hezbollah. They all will and should fall with the fall of Hezbollah. This so called "minister'" should be held accountable when time comes for covering up for the criminals. The criminal axis of evil formed by the Iranian Regime-Assad Regime-and their cheap tools the likes of Hezb Ebola has become a very radioctive one indeed for anyone even remotely associated with it. A major liability indeed!

Aoun is Psychiatric nutcase...what i call hypomanic, Charbel is worse...he's a Schizophrenic ...!