Saniora from Doha: The STL Provides Guarantees to the Suspects 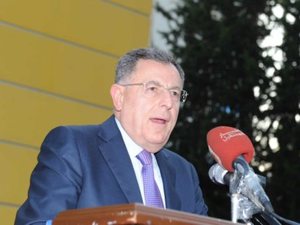 Al-Mustaqbal parliamentary bloc leader Fouad Saniora has stressed that the suspects in ex-Premier Rafik Hariri’s murder have guarantees and they are still suspects.

In remarks to pan-Arab daily al-Hayat in Doha, Saniora said: “From the start we said we want justice and don’t mean by it any type of revenge because in the past three decades Lebanon has lost two presidents, three prime ministers and several ministers and intellectuals.”

“All these martyrs were killed and no one knew who was behind the crimes,” he said before leaving the Qatari capital.

The STL “provides guarantees to the accused and they are not yet convicted. This is an indictment,” Saniora told al-Hayat.

He said discussions focused on the situation in the Arab world and the developments in Lebanon.

Asked about the situation in Syria, Saniora said: “All what we want is what the Syrian people want. They are saying their word every day. They want freedom, democracy, and peaceful rotation of power.”

“We reject the crimes committed” against them, he said, adding that al-Mustaqbal movement supports them but does not interfere in Syria’s affairs.

and all those who was stealing and betraying his country during you being illegal PM are still guilty. no court needed.