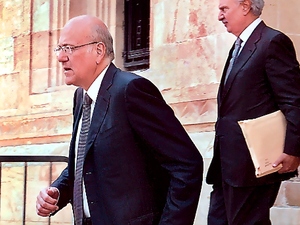 Premier Najib Miqati has “no comment” on a TIME magazine interview with one of the four suspects named in the international tribunal indictment, his sources told An Nahar daily published Saturday.

But Miqati tasked Justice Minister Shakib Qortbawi with following up the issue in accordance with appropriate legal measures.

Qortbawi called General Prosecutor Saeed Mirza asking him about the allegations of the Hizbullah suspect, said a statement issued by the minister’s office.

Mirza denied that he had any knowledge about the suspects’ whereabouts, it said.

The suspect has said that the Lebanese authorities would have arrested him if they wanted to.

The Special Tribunal for Lebanon indictment alleges the mastermind in ex-Premier Rafik Hariri’s assassination is Mustafa Badreddine. The other suspects are Salim Ayyash, also known as Abu Salim; Assad Sabra; and Hassan Oneissi, who changed his name to Hassan Issa.

"I don't care about the indictments. Let them come to arrest me," the man told TIME in an exclusive interview, which he gave on condition of anonymity despite having been publicly named by the STL among the four suspects.

One more punch in the face of Mikati... A small journalist working for an American newspaper was capable of locating and interracting with one of the indicted people. Mikati...Mr Prime Minister...with all the resources of the State was not capable of doing so??
What a farce! RESIGN!! JOKER!

Hassan is making a fool out of you and your cabinet ya Najeeb that's why they got the "suspect" to come out. They want the whole world to know, what we knew all along, you are an impotent figurehead Hassan's own version of a bumbling Lurch the butler, yes Najeeb they rang you should answer.

Tell the world I'm brave and fear no one like my Sayeed , but please tell them where I am !

correction:
Tell the world I'm brave and fear no one like my Sayeed , but please don't tell them where I am !

Ya Najib Ya Najib
what are you doing to yourself? why did you put yourself in such an embarassing situation? Why supposedly a smart and astute and successful businessman would put himself in such a no win situation? Please don't tell me you did that for the sake of Lebanon and Lebanese!!! How many bruising punches are you willing to take for "the sake of Lebanon"????
One good advice: RESIGN !!!!!!!

Your political career is over Miquati. Hiding fugitives and dealing with the criminal Hezz and Assad could land you in jail and your assetts frozen worldwide. I say summon Miquati to the court to see what he knew and when he knew it. Nasrallah too. he knew where they were.

Miquati, arrest them NOW on the world will roll you too. People have had enough of your terrorist friends.