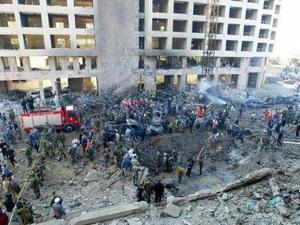 Head of the Special Tribunal for Lebanon Defense office Francois Roux will task a lawyers for each suspect named in the indictment to examine the charges against them, the Central News Agency reported on Saturday.

“Each lawyer will head a team to build a case to defend the suspects and examine the indictment and the charges formed against them,” informed sources told the news agency.

The STL on Wednesday unsealed large parts of an indictment accusing four Lebanese citizens with close ties to Hizbullah in the February 14, 2005 bombing that killed former Prime Minister Rafik Hariri and 21 others in Beirut.

However, the indictment draws extensively on "circumstantial" evidence against Mustafa Amine Badreddine, Salim Jamil Ayyash, Hussein Hassan Oneissi, and Assad Hassan Sabra, all of whom remain at large.

The sources said: “The lawyers will have all the legal facilities to complete their cases.”

They stressed that the lawyers will have a certain timeframe to carry out their tasks.

“They can ask any country to cooperate with them to obtain any necessary information, where all the procedures applied in the court will apply on them,” the sources added.

“Any refusal to cooperate (with the lawyers and their teams) will be considered as lack of cooperation with the international tribunal,” they remarked.

The four suspects face charges that include conspiracy aimed at committing a terrorist act and intentional homicide.

Hizbullah's leader Hassan Nasrallah has ruled out the arrest of the four suspects, hinting that the STL was heading for a trial in absentia.

Bayrouteh , my fellow Shiite Jihadist please refrain from bringing up the false witness issue because they will have to start with the star false witness , the magnificent GMA before he got bought up by his eminence SHN and our President forever Bashar Al Assad , look ..