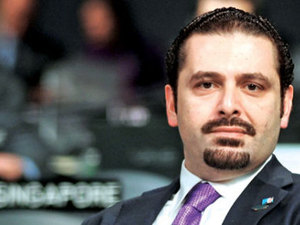 Former Prime Miniser Saad Hariri slammed Hizbullah and the cabinet over the TIME magazine interview with one of the four suspects named in the Special Tribunal for Lebanon indictment.

Hariri’s press office issued a statement on Saturday saying that “Hizbullah considers that the State, its institutions, its government and its security and judiciary forces are only tools to protect Hizbullah… and to cover up their violations and abuses against Lebanon and the Lebanese.”

A man suspected of killing former Lebanese Prime Minister Rafiq Hariri told the Time magazine on Friday that the Lebanese government knows his whereabouts and would have arrested him a long time ago if it could.

"The Lebanese authorities know where I live, and if they wanted to arrest me they would have done it a long time ago," the man, who spoke on condition of anonymity, told the magazine. "Simply, they cannot."

The press office said that Hizbullah wants the state to cover up its political, military and security existence, stressing that “some officials in the cabinet are providing this cover and participating with Hizbullah in their policy to escape from the truth and justice.”

Hariri wondered if President Michel Suleiman, PM Najib Miqati and his cabinet are aware of the interview published by the magazine.

“It seems that none of them want to hear, read, see or talk about anything linked to Hizbullah and their dominance over the government’s decision… and no one can contradict the opinion and the will of the supreme leader of the Lebanese Republic,” the statement added.

The ex-PM slammed the cabinet saying: “The cabinet has two faces and two tongues. One that presents sweet rhetoric to the Lebanese and the international community to justify the lack of carrying out Lebanon’s commitments toward the STL, and another that runs it and controls decisions in order to obstruct the tribunal and protect the suspects.”

The statement stressed Hariri’s determination to stick to the achievement of justice and to face all forms of “political terrorism” and “security domination.”

Four members of Hizbullah have been indicted for the massive 2005 car bomb attack that killed Rafiq Haririand 21 others.

The whereabouts of the four are currently unknown, with the U.N.-backed tribunal's president last Thursday calling for greater efforts to arrest the men.

The tribunal said Wednesday it had enough evidence to try them.

It'a all a matter of time. In the end they will be judged.

The Miquati gov't will fall over this alone.

The criminal Iranian Hezb Ebola is indeed doing just that. It uses the Lebanese state as a tool to cover up all its criminal activities. The Iranian cheap tool Hezb Ebola uses the resources of the goivernment (that belong to the decent people that pay their taxes and bills and that DOES NOT INCLUDE THE zombie followers of Hezb Ebola) to appear to the world as if Lebanon is behind all of that while in fact the majority if the Lebanese (the Free Lebanese) are totally against this thinly masked image that the criminal organization tries to appear to the world as. So the criminals and Iranian regime take all the credit for vitual victories and BS propaganda, while the people of Lebanon take the fall for all the criminal acitivity while their country slips further nto the fold of terror of the Axis of Evil whose Nerve Centre is in Tehran. Which is the complete opposite direction in which the majority if the Lebanese people (including the Diaspora) would like the country to move in.cont'd..

This is precisely what the Criminal Turbanator rat meant by his famous "People Army Resistance" Equation. Has anyone noticed how the vomit yellow flags of the terror group has dsappeared lately and have been replaced by the Lebanese flags in most of the Heab Ebola's terrorists so called "interviews" (or verbal Diareha sessions), these criminals are in Damage Control mode and hence they put on the fictitious "Lebanese' mask, the flag of the country that they have worked tirelesly to destroy since the early eighties tag teaming with the annexation project of the Assad Family criminal regime. Well the END Game is near Turbanator!!

Isn't it ironic that Saad says justice will "free lebanon" and yet he aligns himself with the King of criminals (AKA DR. GAGA)

This is further proof that the loser, cheikh Imbecile is an idiot. The best thing that he can do is continue to undress. Where is Ammar Houry and the remaining Nawars to suck his ... and kis his ...?

Hezbo has become what the PLO was in the 70s in Lebanon.

Saad Hariri is spot on in his judgement when he says that Hizbullah has indeed controlled all facets of the Lebaneses' lives. To start with, they have forced Jumblat to switch sides by threatening to terminate him if he didn't. They then forced Hariri to abscond from the country, thus forcing their will on the Sunnis in lebanon by appointing their puppet Miqati who is hungry for power. Their cadget Aoun on the other hand had long ago been controlled by them; he's only after money before he dies, that's why he's asking for 1.7 billion dollar for electricity in order to steal it. As for the prime ministers who came before like Saniora, they also were corrupt and have done worse than what Hizbullah is doing now. I new Saniora when he was a director at bank mediterrane and I know how he came to power through his partisan behavior.

I am a Lebanese who left Lebanon for more than 20 yrs because I know that lebanon is run by people whose aim is not to build Lebanon but to eat it.

Do you really think anyone will take your comments seriously with the venom and bile seething from in between the gap in your teeth?

There are better ways to discuss these issues. Your hate speech only contributes to the ongoing injustice and war we are seeing in the world, specifically in Lebanon. Man up with words that people can think about, instead of stirring up emotions and prejudice.

Do you really think anyone will take your comments seriously with the venom and bile seething from in between the gap in your teeth?

There are better ways to discuss these issues. Your hate speech only contributes to the ongoing injustice and war we are seeing in the world, specifically in Lebanon. Man up with words that people can think about, instead of stirring up emotions and prejudice.

Time magazine is credible and I don't believe for a moment they would be a part of a "STL/Zionist" plot along with Der Spiegel and all those conspiratorial publications. Hezbollah's narrative is boring and believed only by the lemmings who follow them.

As to Le Big's red herring regarding Time Magazine speculation about the evidence: there is a big difference between reporting events and commentary, something that ought to be clear to most people who're familiar with real journalistic standards. Opinions about the evidence are a dime-a-dozen. So let the court go into session and it will all be sorted out. I for one am willing to accept the verdict.

In any case, I love it when the Hezbollah minions mine the same publications they're trying to discredit for favorable quotes. So precious!