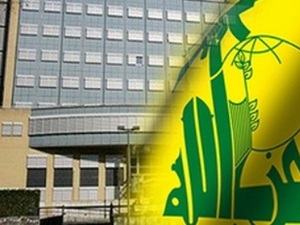 Hizbullah denied on Saturday that the Time magazine had interviewed one of the suspects named in the indictment issued by the Special Tribunal for Lebanon probing the assassination of ex-Premier Rafiq Hariri.

Hizbullah’s media department issued a statement saying “the Time magazine reporter claimed that he met a high-ranking source from Hizbullah, then found himself introduced to the suspect.”

“No official from Hizbullah met with the Time magazine reporter… the report is completely false,” the statement added.

It stressed that the report is “fabricated by the STL.”

Time magazine published on Friday an interview with one of the four Hizbullah members accused of involvement in Hariri’s assassination.

The suspect said that the Lebanese authorities would have arrested him if they wanted to.

Four Hizbullah members have been indicted in the 2005 assassination of Rafik Hariri by the U.N.-backed STL.

However, the whereabouts of the four are currently unknown.

Looks like another leak from the friends of Hassan just like the ones to Le Figaro, Der Spiegel, Al-Akhbar, NewTV ...

No by Israel, you bloody idiots! Israel who has killed it s allies one by one ! You've lost the game you senseless fools.you ve turned into a snake that's biting it s own tail end. Even snakes can die from their own venim!

Do you really think that any TRUE LEBANESE believes a word you say. You are NOT STEALING Electricity either, and you DID NOT Murder, or try to Murder, all those March 14 Members. Bunch of LOW-LIFE LIARS.

Hizbollah credibility is free falling and will get worse day after day suspects have not been delivered to justice, dragging along with it the Assad/Hizbollah Miqati cabinet. First Hizbollah took the great Shia community to the abyss, making the most enlightened Shia community in the world strangers to their own culture and traditions, imprisoning them in an iron curtain of hate and oppression. Now it is dragging the entire country on a path similar to North Korea where ordinary people die from famine while their leaders build rockets and nuclear bombs and organize parades of brain-washed people indoctrinated on total obedience, culture of war and distrust, imaginary victories, and leader worship! Lebanon will only be free when Shia reject this imported Basij culture and realize their hopes are the same as the Green Revolution in Iran. That day is certainly coming in 2013 because as certain the sun will rise again, as certain the tyrants in Damascus and Tehran will be deposed.

Remember the "Israeli" small airplane footage Nasrallh showed the world? Now that was a fabrication and Nasrallah is a false witness. Apparently he is the expert on false propaganda.

Just like there are no Shia building on Church land in Lhassa.

How did the STL fabricate an interview with TIME that has nothing to do with the STL? Sounds like bullcrap.

bigdig.. they used cell phones and did everything in cold blood without caring much about covering tracks and such BECAUSE this is BUSINESS AS USUAL to these thugs, every theif is only careful the first time, how about stealing in a country where the thief and the police are the same person!??! lol. They are used to murder and terrorism for many years. Do you really think that the idiot bashar or the idiots in tehran thought for one second that there will be an INTERNATIONAL investigation?!!? think again man and open your eyes. Bashar still believed to the last second that Russia would veto the STL, it did not. And Bashar will fall by the end of the year and Russia will not veto it either. The hizzies glory days are over, you know why; ma tar tayer w irtafa3.. the bird can only fly so high.

very possible that hezbollah set up a phony interview so they could later claim
how fabricated it was to try to discredit the tribunal. they are the masters of false witnesses.

In 2005 they used regular cellphones during operations. When they realised that the gov. was tracking these phones they killed the 2 lebanese army personal that were tracking the phones down and then they made a closed network only for the Hizb. reference may 2007 when the gov. tried to dismantle the private cellphone network and fire the head of the general security at the airport. What came next? They took over Beirut and turned there arms on fellow citizens and killed 100 citizens. They also burned private property and threatened the security of all, Muslim & Christian.

In 2005 they used regular cellphones during operations. When they realised that the gov. was tracking these phones they killed the 2 lebanese army personal that were tracking the phones down and then they made a closed network only for the Hizb. reference may 2007 when the gov. tried to dismantle the private cellphone network and fire the head of the general security at the airport. What came next? They took over Beirut and turned there arms on fellow citizens and killed 100 citizens. They also burned private property and threatened the security of all, Muslim & Christian.

Well, I have a question: All those spies discovered since 2 or 3 years in telecom companies, they've been proven guilty right? But how? Never heard about their presentation at a court, with an attorney, a defense... Never heard about real enquiries, real proofs, indictment... How come these people are guilty just because HA said they are, when it takes 20 years of international justice to maybe one day convince the lebanese that the 4 suspects should answer questions?