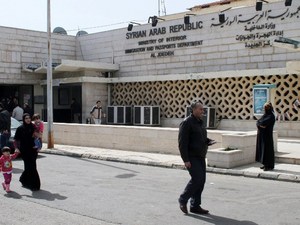 The Ministry of Interior on Saturday warned Syrian refugees that they must not travel to their country as of June 1, saying that otherwise their will lose their status as refugees.

The ministry announced in a released statement that Syrians and those registered with the UNHCR “must refrain from entering Syria as of June 1, 2014.”

"Or else, they will lose their status as refugees in Lebanon,” it stressed.

The statement urged abiding by this decision to preserve “the safety of refugees,” noting that all concerned border authorities will be notified of this measure through the General Security.

The Ministry of Interior explained: “We are keen on security in Lebanon and on the refugees' relationships with Lebanese citizens in areas where they are residing.”

And this measure was taken “to prevent any provocation,” it elaborated, asking the United Nations and the civil society's organizations which are concerned with Syrians' status in Lebanon to “assume their responsibilities in this matter, inform refugees of the ministry's decision, and to give this issue the utmost importance.”

Saturday's decision comes three days before Syria is to witness the first presidential elections since the eruption of the ravaging civil war that has torn the country in the past three years.

On Wednesday and Thursday, thousands of Syrians streamed to their embassy in Yarze near Beirut to vote in the presidential polls, in what Damascus' Lebanese and Syrian critics have described as a prearranged “show of force.”

The midweek, poorly organized vote triggered a suffocating traffic congestion in the area, stranding thousands of commuters in their cars amid an excruciating summer heat.

Yarze was also festooned with Syrian flags and portraits of President Bashar Assad, who is expected to cruise to victory in the election.

The March 14 alliance strongly criticized the elections at the embassy, calling for dropping the refugee status of those whose life is not in danger and who are constantly traveling across the border.

Meanwhile, Syrians who did not head to their embassy to participate in the elections were given a second chance to cast their votes on June 3 on the border with Syria.

send them all home for the sake of mother lebanon