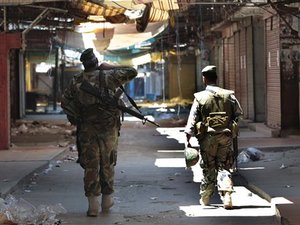 Syrian President Bashar Assad may seek to create unrest in Lebanon after the West called on the president to step down, western diplomatic sources told the Kuwaiti al-Anbaa newspaper in remarks published on Sunday.

They explained that Assad has now lost his “most important strategic card”, which is the regional, Arab, and international support.

This will therefore force him to launch a confrontation with the international community, they continued.

Syria is now facing several crises, starting with the “legitimacy of the regime given the protests against it”, they added.

“Assad will therefore attempt to avoid the crises through creating unrest in Lebanon, which remains Syria’s only open ground to confront the international community,” said the sources.

If we Deport Aoun, Nassrallagh Berri Jumblat Miqati Gemayel Geagea Slueiman and the rset of the crooks and vote in a new parliament from the people we can avoid the next phase of this tragedy in Syria. Buy the way Deport all these GUYs TO SYRIA! Let Aoun enjoy his holidays in the mazee

Listen to Aoun and he will tell us all is fine in the country! Let us see Aoun go and fight Israel, I bet he will be the first guy to disappear on plane to Paris where he has his bank accounts! cheap small time crook is Aoun

I beg to differ with this. Assad can't use the Lebanese paper because it has been used over and over again without success. Inciting violence in Lebanon will result in mayham which could back fire on assad. keeping Lebanon quiet is in the best interest of Assad. At this moment he's continuing his control over Syria in the hope that uprising could be crushed in its cradle which leads to the Arabs and the international community to negotiate with him on certain issues they care about while keeping him in power endlessly. It did happen before when the USA gave Assad free hand to quell Lebanon and kill whoever step in his face for the sake of keeping Israel safe. I think something like this could be cooking behind closed doors which would lead to the perpetual staying of Assad family in power. In simple terms, this is what they call deplomacy.

the last card of bashar is not whole lebanon:
its only his remaining allies. qadafi is the last brake b4 bashar is....

Where our General Aoun! what has he got to say about Syria,Lybia, Egypt, Tunis, Yemen!
Khalass ma fi shee

Please ask Aoun to sort out our problems quickly, and give him a few hundred million dollars so he can run away to spend it with his family!

For the Assad regime to do anything in Lebanon, they need money. They are now in a state of conserving their resources as they will need them when they depart to their final destination (most likely Spain).

For the Assad regime to do anything in Lebanon, they need money. They are now in a state of conserving their resources as they will need them when they depart to their final destination (most likely Spain).

Picture taken in Tripoli in the area of Ba3el Mohsen and Bab el Tabanet where we have minority Alaweet on the high rises buildings in Jabal Mohsen shooting down at the market place Bab el Tabanet when they get a signal from their master in Syria to ignite the Lebanese territory.

Assad's regime will not fall because Barak Obama said so. The Great Obama's writ is not written so large.
Assad will fall when the Libyian people have cashed in Gadaffi and this will happen before Labor Day. When Gadaffi falls, then the Syrians will have the template for taking down Assad. It will not be done by marching into a spray of lead with bare chests, but will be done by men and women willing to take up arms to get their country back. It is the only way with people like Gadaffi and Assad. The only "call to step down" they hear is from the report of cannon fire.

The time is coming quickly.

Danger is looming all over lebanon in the form of tinted window cars.Many attacks on civilian innocent people are taking place but the gov is censoring the media. thugs are watching every move of the lebanese people. attacking a priest in lassa ignited a time bomb. That bomb is ticking . Sooner or later the bomb is going to explode. The free lebanese people are organizing a strategie that will surprise the thugs. Its going to be the shock and awwww. May God protect the Free Lebanese people and Lebanon. Soon after the fall of Libya. The world will turn towards Sirya and Lebanon. Gaddafi will fall next week. Its only a matter of time and timing.

Those whose political survival depends on Syria will decide soon if they want to fight for their masters or wiggle their way out from the Syrian agenda.
Hezbollah will be cornered and its leadership will be split between going on the defense of the falling regime and realigning themselves back in a more lebanese direction.
Obviously, the Iranian regime will pressure hezbollah to fight till the last Shiite but it is certain that most of the shias will see the light before going suicidal against their fellow lebanese.