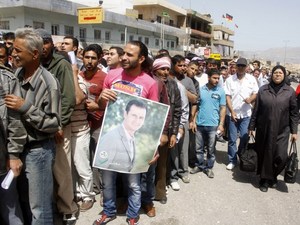 Unknown gunmen on Tuesday opened fire at a Syrian polling station in the Jdeidet Yabous area near the border with Lebanon, which witnessed huge gatherings of Syrians who flocked to vote in their country's presidential election that got underway on Tuesday.

“Sniper gunshots from al-Zabadani mountain are targeting the polling station in the border area of Jdeidet Yabous,” LBCI television reported.

The TV network aired footage of armed security personnel running near the station while journalists were asked to leave the area out of fear for their safety.

According to Voice of Lebanon radio (93.3), the Syrian interior ministry increased the ballot boxes at the Jdeidet Yabous polling station from six to 17 “due to the massive turnout.”

“The main entrance of the al-Masnaa border crossing was turned into a pedestrian pathway due to the severe traffic jam on the border,” the radio station added.

Lebanon's National News Agency said the square and streets of the Bekaa town of Hermel witnessed mass rallies by Syrians residing in the region and preparing to vote in their country's polls.

It said security measures by the Lebanese Army “prevented voters from reaching the polling stations that were set up on the border with the towns of al-Qasr, Hawsh al-Sayyed Ali and al-Misherfeh.”

“But dozens managed to cross on foot through the side roads and neighboring groves,” NNA added.

The agency said some of them had arrived in the area at early dawn while others “slept in the open, awaiting the opening of the polling stations.”

Meanwhile, several people were injured when a Syrian bus carrying voters collided into security concrete blocks. The wounded were rushed to hospitals in the area.

In the North, around 800 Syrians crossed into their country through the al-Abboudiyeh border crossing, nearly 600 via the al-Arida crossing and some 200 through al-Buqaiaa, according to NNA.

Last Wednesday, tens of thousands of Syrians living in Lebanon flocked to their embassy in Yarze near Beirut to cast their vote in an election branded by the Syrian opposition and its backers as a "farce."

Two little-known candidates are facing Assad in the vote, which will only be held in regime-held territory and exclude refugees who fled Syria through unofficial crossings.

The Syrian Embassy in Lebanon rejected in a letter of protest recent measures taken by the Lebanese government against the Syrian refugees, As Safir newspaper reported on Tuesday.

Interior Minister Nouhad al-Mashnouq had announced Saturday that Syrian refugees in Lebanon will lose their status as such if they return home for a visit.

More than a million Syrians have fled their war-torn country for Lebanon in the past three years, according to the United Nations.

The refugee influx into Lebanon has burdened the country's weak economy, with politicians on all sides calling for measures to limit the flow.

Lebanon has not signed the Convention on Refugees, and refers to Syrians forced out of their country by war as "displaced."

The authorities say the actual number of Syrians in Lebanon is far higher than the nearly 1.1 million accounted for by UNHCR.

Lebanon has frequently complained it lacks the necessary resources to cope with them, and that the labor market is struggling to accommodate them.

you too my dear friend josephani:)

theresistance 4.0 - Only an imbecile or a paid propagandist will consider what is happening in Syria democratic or a free election!

You call yourself Lebanese and you shout Labayka ya Bashar? 3ayb!

You write "Lol this coming for the mod celebrating the FSA and AL Nusra?!!".
If you are addressing me, I have for words for you:

You are a lier.

Only the Butcher's useful idiots (such as yourself) consider these "elections" to be legitimate.

Spoken like a repeated sore LOSER! Haram Texy...maybe them cowboys will be your ray of hope this year...you cant be on the losing side all your life...can u? :) Have a nice day

What do you think about the Giants this year?

any selfies, youtube videos, statistics, microsoft excel charts, bar charts, 3D simulations, to support your claim that "Increasing number of Syrians including many Sunnis are saying it is better to stick with the devil they know (Assad regime) than the devil they dislike more (the armed mostly Takfiri "opposition").

I can understand their reasoning. This war brought them hell. But it doesn't make Bashar less of a criminal.

And any Lebanese with a microgram of self respect wouldn't shout labayka ya bashar. The only honorable word after "labayka ya" is "Loubnan".

Your quoting Koran 109:06
Correct ! Because I did say it's your God given right to practice your free will...
Like the talaban and Isis and Khomani they impose and force Islam on others and this is were we Muslims have lost cense. Koran 2:286 ... Let there be no compulsion in religion: Truth stands out clear from Error: whoever rejects evil and believes in Allah hath grasped the most trustworthy hand-hold, that never breaks. And Allah heareth and knoweth all things.

Go ahead tell me that Mohammad (sws) was Shia or practiced Takfiri like the many terrorists out there that harm the truth of our religion !?!?!
Shia belief Takfiri belief same ... It's Your right though do ahead!