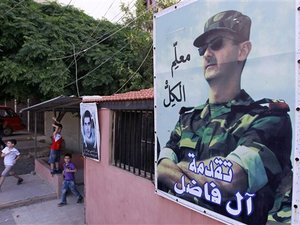 Supporters of Syrian President Bashar Assad opened fire in the air and launched fireworks in several Lebanese regions as his expected election victory was officially announced on Wednesday evening, as others roamed the streets in convoys.

“Gunfire erupted in some of Beirut's suburbs and central Bekaa towns in celebration of Assad's win,” LBCI television reported.

Syria's parliament speaker Jihad Laham had announced that Assad has been re-elected by a landslide, capturing 88.7 percent of the vote.

“Gunshots were fired in the air and convoys took to the streets of Baalbek and Hermel in celebration of Bashar Assad's presidential win,” said al-Jadeed TV.

Meanwhile, reveling residents fired gunshots in the air and hurled a hand grenade in the pro-Assad Tripoli neighborhood of Jabal Mohsen.

The celebrations sparked tensions in the neighboring Syria Street, which separates the district from the rival Bab al-Tabbaneh area, according to LBCI.

The developments prompted the army to carry out raids in Jabal Mohsen to arrest the shooters.

According to state-run National News Agency, the Tripoli areas of al-Beddawi and al-Qobbeh also witnessed gunfire.

Indeed, because they are pro Salafi.

Indeed, because Miss.tic is an Assad stooge and a wanna-be militia Warrior.

happy to see you partake in your country's "elections"

You mean in 2006 don't you when the rest of us offered you our homes and food to escape Israelis agression ?

As I said before, Assad is too smart to have 90+ percentage. It probably came from Mukhabarat at 100% but he revised it to 88.7 percentage. Democracy at works.

The resistance, Mystic - Are you really so blind as to think that this is a real election?

As I said before, Assad is too smart to have 90+ percentage. It probably came from Mukhabarat at 100% but he revised it to 88.7 percentage. Democracy at works.

Maybe because these numbers are "unverified" and "unverifiable". You seem to believe in BS more than your glorious God these days. Allahu Akbar with a Kalashnikov no ?

Hello anonym
if it is any comfort I also lost a bet. I was expecting Assad to beat Sissi. I have to accept the fact that Sissi after all is more popular than bashar. I have to treat my friend for some foul in the morning and some Barazek from Damascus. That will be an expensive bet for me

The funny part is that you actually believe that 11 million Syrian vote yeah very funny.

Lol you made me laugh for 1 second resistance.

Full that is right I am your father.

You forgot to mention also in Syria. Have a nice day :)

Says the guy from Fort Worth TX. Like I said Ur "special"
have a nice day Texy :)

@FT : I thought you didn't believe in democracy. If this is your idea of democracy, then please, stop even trying to vote or debate. Just ask the Kezb to take over the country by force and have 10M Lebanese magically vote for Aoun as president.

@FT : it is not normal for Lebanese citizens (or any other nationality) to celebrate the election of a foreign president. Especially a dictator who forged his election. A dictator responsible for a very dark occupation of Lebanon and slaughtering of Lebanese. If you find this normal, then you are just like Hezbollah, a traitor. You should be stripped of your Lebanese nationality. This happens nowhere else in the world !

Had any "opponent" of Bashar won the election, you would not see any M14 or Anti-Bashar shoot bullets in the air and light fireworks. This is the true meaning of patriotism !

Also, you supporting Hezbollah terrorists shooting bullets in the air raining back down all over Beirut means you support criminal activities. Those people should be shot in sight ! It's simply unacceptable and you failing to condemn these barbarious acts is a sign you don't belong in this country !

The difference between me and you FT is that you base your arguments on fairy tale hypothesis whereas I talk about facts.

Thank you for making me laugh when you talk about "severed heads on spikes"... this must be Aoun and Nasrallah's spooky bedtime stories. You're an idiot.

Now show me evidence about Geagea, Gemayel or Hariri running around with swords and cutting heads or simply shut up and stop spreading lies.

@FT : how do you accept Hezbollah goons celebrating the election of a foreign president ? What does this tell you about them ? They are nothing Lebanese.

Were you also shooting bullets in the air yesterday ? Do you support such animosity ?

@FT : no one said they don't like the results. We laugh at the results because this is a mockery of democracy. If you believe in these results and believe it would change anything to the situation, you are dumber than you appear :)

So you agree these elections are BS ?

And you agree that Hezbollah is allowed to shoot bullets in the air over the election of a foreign dictator who occupied Lebanon and slaughtered Lebanese ?

Good, thank you for showing you're a traitor too ...