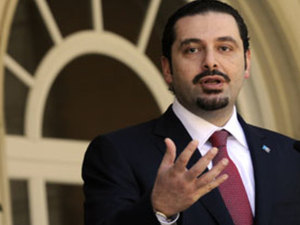 “No elections in the history of humanity have been deplored and described with degrading terms such as the elections that granted Bashar Assad a new presidential term,” Hariri said in a communique.

Syrian parliament speaker Jihad Laham had on Wednesday officially announced that Assad was re-elected by a landslide, capturing 88.7 percent of the vote, after having competed against two little-known challengers – Hassan al-Nouri and Maher Hajjar.

Hariri said derogatory terms such as “farce, despicable, fabricated, bloody and detestable," which had been “repeated daily” by top Western officials against the vote, were “100% true.”

Criticizing the Friends of Syria group, which comprises the majority of Arab and Western nations, the ex-PM said “nowadays they're settling for launching the ugliest descriptions against Bashar as he continues to launch barrel bombs against residential neighborhoods.”

“What human mind can believe the lie that 74% of the Syrian people had taken part in the elections?” Hariri added, slamming “the rigging operations that were broadcast live by TV stations.”

The former premier said “the Syrian people need something more than describing the Syrian elections as a great big zero,” referring to U.S. Secretary of State John Kerry's remarks on Wednesday from the Grand Serail.

He warned that Bashar's persistence as Syria's president is “equivalent to the persistence of war, terrorism and destruction in Syria,” urging an end to “this tragedy and farce.”

Hariri also slammed “Bashar's partners in the creation of death and destruction, who welcomed the elections and erupted in celebratory gunfire.”

funny because he is saying the very same thing as aoun said for decades.... that the assad family shall be removed as it only brings harm to Lebanon till they are in power...

funny how your memory is selective and suffers from Alzheimer... LOL

sure southern, predictable answer...
the assad regime did not change so spare us your loss of memory....

I wonder if Hariri prefers democratic elections in his home country, the kingdom of terrorism.

don't worry tex... for M8ers if you are against hezbollah and iran it means you support KSA! because THEY support iran so they believe their opponents have to support KSA!
a few months ago it was you were zionist...

anyway, their binary minds cannot comprehend this, it makes what's left of their brain bug....

I vonder if Iran islamic Rep Public will accept you as one of Khaminai boys..

Kar Koubi, You hat to the KSA is clear. This is not a freindly pace for people like you.

Could someone please tell me how can you run an election when you have a civil war with more than 160000 people dead and more than 4 million Syrian as refugees in different countries, bomb are still dropping in many cities including Damascus.(Only in Syria!) This theatrical election is nothing more or less directed and produced by Iran and the actor is Bashar Assad. defintly a drama not Oscar award winner I give it half star out of five.. Bottom line I feel so sad for the Syrian people may God have mercy on them.

ft,
Your HA and M8 (Syria Patriots) have not only kept all the bridges with Syria but also added countless tunnels, so why don't they tell us what happened to our missing Lebanese?

B Kell (Guest) over 6 years

Does anyone remember that Lebanese and thr K Saudi Arabia financed terrorists to attack the USA on 9/11/01. Perhaps the revenge of the West for financing the terrorist to have you all war and destroy each , you are definitely achieving that theory.
In Ireland we had a similar conflict created by the U.K., terrorists that were British controlled ,
Many knew it and there was no response all of Ireland's military weapons were inferior, The USA helped uphold these myths they flew in politicians and congratulated themselves for continuing a divided Ireland with England's approved rulers. N.Ireland to the world was religious strife, it was the haves against the have nots.

Southern of Iran, You are on the wrong track, Let your Terrorists of Hizbolah go to their mother Iran and spare us their supreme Divine filth.

Southern of Iran, You are a pure example of a lost soul.

Bashar and Nasrallah with the help of Aoun, Berri and Franjieh will try to trick ex PM Hariri to return to Lebanon in order to murder him !

Your name is Th Boar, So spare us your trash that fit you Nasrallah thugs and the rest of the filth.

lol
the only one hariri can eliminate from political existence is himself. he did a very good job at it. now's he's just a bitter saudi spokesperson