Public to Get First Glimpse of King Memorial 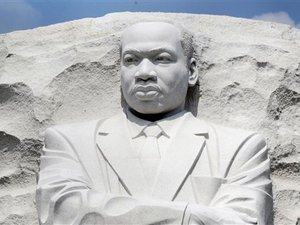 Tourists and Washingtonians were about to get their first up-close look Monday at the memorial to the civil rights leader Rev. Martin Luther King Jr.

The site was set to open without fanfare around 11 a.m. to kick off a week of celebrations ahead of Sunday's official dedication.

The memorial sits on the National Mall near the Tidal Basin, between memorials honoring Presidents Abraham Lincoln and Thomas Jefferson. It includes a 30-foot (9-meter)-tall sculpture of King and a 450-foot (137-meter)-long granite wall inscribed with 14 quotations from the civil rights leader.

The sheer size of the sculpture of King sets it apart from nearby statues of Jefferson and Lincoln, which are both about 20 feet (6 meters) tall, though inside larger monuments.

A panel of scholars chose the engraved quotations from speeches by King in Atlanta, New York, Washington, Los Angeles and Montgomery, Alabama, as well as from King's books and his letter from a Birmingham, Alabama, jail.

One of the stone engravings reads: "We shall overcome because the arc of the moral universe is long, but it bends toward justice."

The National Mall site will be surrounded with cherry trees that will blossom in pink and white in the spring.

Sunday's dedication ceremony will mark the 48th anniversary of the March on Washington and King's famous "I Have a Dream" speech. President Barack Obama is scheduled to speak at the dedication.