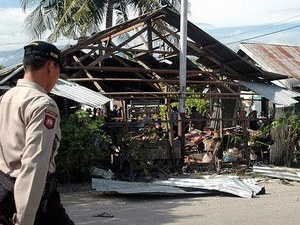 A mayor is trying to ban Christian churches on streets with Islamic names, the latest attempt to block construction of a new parish in the world's largest Muslim-majority country.

Critics say the proposal — however arbitrary — is another example of growing religious intolerance.

The Taman Yasmin Indonesian Christian Church was supposed to open in the city of Bogor in 2008, but residents protested, claiming its permit was illegal.

Though the Supreme Court ruled in favor of the church in December, Mayor Diani Budiarto refused to comply.

He argued he was pushing for a decree to make it illegal to open churches on streets with Islamic names.

Indonesia, a secular nation of 240 million, has a long history of religious tolerance, but a small extremist fringe has become more vocal — and violent — in recent years.

Critics said President Susilo Bambang Yudhoyono — who relies heavily on Islamic parties in parliament — has remained silent as minorities have been attacked by hard-liners or seen their houses of worship torched or boarded up.

Christians, who make up 10 percent of the population, also say it can take years to get permits to build new churches.

The Taman Yasmin worshippers have been holding weekly services in front of their sealed off building for nearly three years, said Bona Singalingging, the church spokesman.

He called the mayor's latest proposal part of a "dangerous" trend.

The Setara Institute for Peace and Democracy, a human rights group, says attacks on religious freedom by hard-liners more than tripled in the last two years.

In 2010, there were 64 incidents, ranging from physical abuse to preventing groups from performing prayers and burning houses of worship, up from 18 in 2009 and 17 in 2008.