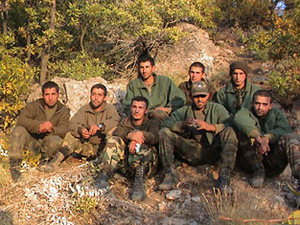 The kidnapping in Iraq of dozens of Turks by extremist fighters has revived debate over Ankara's alleged courtship of jihadist groups and prompted calls for an overhaul in its approach to the war in Syria.

The abduction in Mosul last week of 49 Turkish diplomats, guards and children, as well as 31 truck drivers by the Islamic State of Iraq and the Levant (ISIL), drew a fierce rebuke from Turkey's government and the opposition, which accused Ankara of siding with extremists fighting in Syria and Iraq.

The government of Prime Minister Recep Tayyip Erdogan has long denied maintaining tacit ties with extremists via his spy agency in a bid to confront the common enemy of Syrian President Bashar Assad.

Today, ISIL controls swathes of Syria as well as large regions of northern Iraq, seizing the cities of Mosul and Tikrit in a lightning offensive last week.

"Turkey got it wrong in Syria and in fact in the Middle East in general. Today, Turkey feels the threat of radical groups towards its security and stability," Mehmet Altan, a lecturer at Istanbul University, told the opposition Today's Zaman.

"Turkey should immediately revise its Syria policy and realize the other actors in the game," Atlan added.

The Turkish army on Saturday denied a report that appeared in the opposition press alleging Turkish officers had trained ISIL militants now fighting in Iraq.

"This information is baseless," a statement from the military command said.

Analysts said Erdogan's government had failed to grasp the severity of the threat radical groups across the border in Syria and Iraq posed for Turkey.

"We've all seen the pictures in the media of bearded men brandishing weapons, being treated in a hospital in the south of Turkey," said Serkan Demirtas, a columnist for Hurriyet Daily News.

"Turkey is paying the price of its collaboration with terrorists and without doubt it has misjudged the situation," he said.

Ozgur Mumcu, a commentator for the liberal newspaper Radikal, agreed that the government had made "a gross error of judgement".

"After the diplomats return we clearly need to analyse the political and intelligence gaps" between Ankara and Iraq and Syria, he wrote.

Under international pressure, and likely conscious of the growing security threat they posed, Ankara finally included Al-Nusra and ISIL on its list of terrorist organisations in June.

Some commentators speculated last week's abductions may have been revenge for Turkey's blacklisting of ISIL.

The government has so far favored diplomacy over force in response to the kidnapping, an approach fiercely criticized by the opposition, which has called for Foreign Minister Ahmet Davutoglu's resignation.

"The people will decide," Davutoglu said Thursday after a meeting of leaders of the opposition Republican People's Party (CHP).

But CHP member Mahut Tanal told Agence France Presse: "If democracy exists in this country, Erdogan and Davutoglu must go immediately and pay the price for this fiasco."

Reports say Davutoglu has vowed to stay on at least until the hostages and all Turkish citizens in Kurdish areas of Iraq -- between 7,000-10,000 -- return to Turkey.

The minister said Saturday that national carrier Turkish Airlines, which had ceased to operate out of Mosul, would put on additional flights to repatriate Iraq's Turkish residents.

Deputy Foreign Minister Naci Koru said on Saturday that the Turkish hostages were in good health and being well-treated but that there was "no negotiation process" between Ankara and ISIL.

He said the kidnapping has "developed unexpectedly" when Iraqi security personnel pulled out of Mosul, contradicting remarks by Deputy Prime Minister Bulent Arinc, who said Ankara was given advance warning that its consul would be targeted.

The government is under fire for its failure to evacuate the compound ahead of the arrival of jihadist fighters in Iraq's second city and for surrendering its staff without resistance.

Erdogan, who is widely expected to run in a presidential election on August 10, rejected criticism over his handling of the kidnapping.

"The opposition has lost its mind. We are doing everything we can to bring our people back from Mosul safe and sound, and all it can think about is using this situation" for political gain, he said.