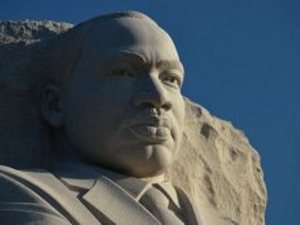 The dedication -- slated for Sunday, the 48th anniversary of King's "I Have a Dream" speech -- will instead take place in September or October, said Harry Johnson, head of the memorial project.

"We will announce those details as soon as they are available. For now, we want to make sure that you have this new information as soon as possible," Johnson told reporters.

"There are so many individuals who worked tirelessly to dedicate the dream, and make this memorial a reality," he said.

The 28-foot (nearly nine-meter) "Stone of Hope" statue is a white granite likeness of King is gazing into the horizon, his arms folded. Designed by Chinese artist Lei Yixin, the memorial cost $120 million.

Visitors enter through the Mountain of Despair, a huge boulder symbolizing African Americans' struggle for peace and equality.

"In the words of Dr. King, we must accept the finite disappointment but never lose infinite hope. With that in mind, let's remember the spirit of the memorial, justice, democracy, hope and love," Johnson said.

While Washington is further inland than a number of other cities, rail operator Amtrak has called off train service between the U.S. capital and the South and a number of coastal communities are already being evacuated.

President Barack Obama, the first African American U.S. leader, had been scheduled to speak at the dedication on Sunday, a day after ending his vacation on Martha's Vineyard in Massachusetts.