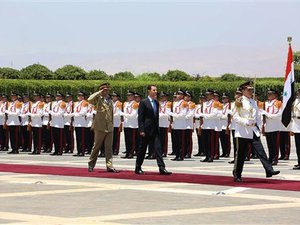 Syrian President Bashar Assad on Wednesday hailed Hizbullah's fighters who “stood side by side” with the Syrian army, thanking those who considered supporting Damascus equivalent to “defending south Lebanon.”

“I salute the loyal heroes of the Lebanese resistance, who stood side by side with the heroes of our army,” Assad said in a triumphant speech delivered after he took the oath of office for a new seven-year term.

The Syrian leader reminded that these fighters had “fought honorable battles together on both sides of the border and offered martyrs in defense of the axis of resistance.”

He saluted them and applauded “the family of every martyr of them that showed mutual loyalty and considered the duty of standing by Syria equivalent to the duty of defending south Lebanon” against Israel.

Assad, 48, won a June election denounced as a "farce" by his detractors as it was staged more than three years into a devastating war that has killed more than 170,000 people and uprooted millions.

Hizbullah had officially announced more than a year and a half ago that it was fighting alongside Syrian troops against “takfiri” armed groups.

Party leader Sayyed Hassan Nasrallah has several times repeated that the group's fighters “will be where they should be” in Syria, vowing that Damascus will not be left alone in its confrontation with rebels seeking to oust the regime.

to you they are loyal heroes, but to us they are terrorists. But as the saying goes " birds of a feather flock together".

Gaza is up in flames... Who are you resisting?

Extremism from both sides, nothing but child killers in the name of "God" Alrighty, now let's see how many more generations of hate are gonna come out of this, I'm gonna predict 10. In the meantime the rest of society will advance. May the souls of the dead children caught up in this horrible extremism from both sides rest in peace.

But of course they want us to forget about that little piece of info too :)

so when these rebels attack the LAF for "openly supporting hezbollah", don't cry foul. I will remind you of your words.

Geha - This guy and his supporters have already proven that their are psychos and liars. He is no better than Natanyahoo. He is indeed worse.

Aoun was once and still is a soldier in Assad's army.

Ya Assad, I would like to correct your vocabulary :

- Loyal Heroes ? If they are Loyal to you, then they are traitors to Lebanon. Anyone displaying loyalty to foreign dictators are traitors in their own country

- Lebanese Resistance ? It's a god damn Islamic Shiite Resistance. There is no drop of Lebanese blood or spirit in this KEZB ! If there were Christian and Sunni fighters amongst their ranks, you could call them so but until proven otherwise, they are a shiite, islamic and iranian resistance !

- Heroes ? Heroes are people who achieve victory with honnor. Not through terrorism, butchery and alliegance to foreign countries. Hezbollah are not Heroes in Lebanon.

There is no HONOR in war activities. PERIOD. all groups, Leaders on all sides as well have no HONOR when human life is taken. And I do mean all groups world wide who par take in activites that lead to strife on the planet. Get a hobby, join a group of old women who KNIT. LMAO just kidding. Do something good rather than bad on the planet.