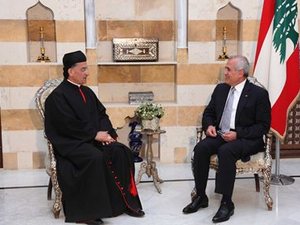 He said after holding talks with Maronite Patriarch Beshara al-Rahi: “Lebanon is keen on the safety of the U.N. Interim Force in Lebanon.”

This same position was relayed to French President Nicolas Sarkozy by Prime Minister Najib Miqati who is in France where he took part in the "Friends of Libya" conference.

Al-Rahi visited Suleiman ahead of traveling to France on an official trip.

it all depends on bashar and hassoun,u have nothing to do.
N.B.i like this dress of monseigneur rahi more than the red one.

Suleiman stop talking shit and get on with doing your job. No stealing money for you and your friends, just work for a change and be patriotic, no more phone calls to syria concentrate on lebanon for a change