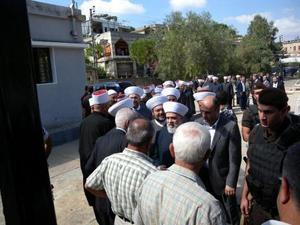 Grand Mufti Sheikh Mohammed Rashid Qabbani said Friday that the army is the only state institution that guarantees the unity of the nation, calling for Lebanese support to the military leadership.

During the inauguration of a mosque in the southern town of Shebaa, Qabbani said: “There is still an opportunity to preserve our unity and coexistence and cooperate to build the future of generations.”

“The army is the only institution that guarantees the unity of our nation Lebanon and if the military falls apart then there would no longer be any Lebanon,” the Mufti said in his rare visit to the South.

The trip has angered al-Mustaqbal movement whose lawmakers boycotted Eid al-Fitr prayers that Qabbani led at al-Amin mosque in downtown Beirut on Tuesday.

The boycott came to admonish him for meeting with a delegation from Hizbullah and the Syrian ambassador on the day the international tribunal issued the indictment in ex-Premier Rafik Hariri’s assassination case.

“We should support the military leadership … to allow the army to salvage the country from permanent dangers,” Qabbani said.

Qabbani’s support for the army on Friday was a clear indication that his relations with former Premier Saad Hariri’s al-Mustaqbal have deteriorated.

Justice is the right of every Lebanese and stability is the duty of the state, the Mufti said in his speech. “No party is capable or can make claims of imposing its will on the other.”

Until when do you want Qabbanni to continue to side with and support Hariri Mafia, his thugs and his Al Qaeda - Akkar and Tripoli Brigades now that they have shown their true identity without hesitation and without any shame? At least he is not as hateful or a dumb as Sfeir, who got the boot of his life from the Pope. ma biso7 ella al sa7i7

where was the army on may 7

look like qabbani has seen the truth and realized that he stick so far with the wrong crowd. but sense has come to him, and some extremists funded by outside secret services have farted to the wind

The current government certainly is not a source of unity.

Another Jumblat, got scared because he got threatened, be sure Mr Qabbani that Sunni's are not going to follow you anymore, as you started making concessions and as well clearly searching to be a leader in times this sect is in crisis between Mikati and Hariri, well you can rest assured, 80% of sunnis support Hariri, he has done a lot more than any of you will ever do for them, as well for us the christians, and chiites, and druzes, Medical centers, Schools, were done by this man, as well as your centre-ville, and the airport anew again

a turban supporting the army? it's always good.
i hope he will not change his mind if circumstances change,but its always the right direction,stay the course qabbani .

@shab
I agree with you religious men should stay out of politics, but no need for offensive language...

Your hatred for Harriri has been obvious to all, but what relevance are your comments in relationship to the article, huh? Where did u see the name of Harriri mentioned in this article?

BeirutPost: ... Then why are you and bigdik on it still?

hey stupid bigdig.. how about the WORLD community lol, how many friends does your miqati have?? he went for 3umra two times in 5 months and no one cared to meet with him infront of cameras.

And the answer is: Axis of Evil are: Syria-Iran and Hizb el shaytan
The rest are the entire world.

bigdig, didn't I ask you when is your B-day...Man I want to get you a shovel so you can DIG a BIG hole and burry yourself. Man 7allak tefham wloooooo