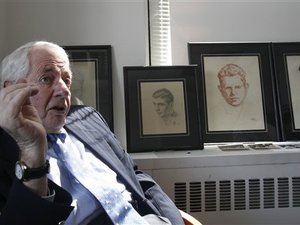 He survived the Holocaust carrying the solemn portraits he drew of concentration camp prisoners who labored alongside him in one of the largest counterfeiting operations in history. For decades, those portraits have rarely been seen.

Now the collection of 43 drawings by Felix Cytrin of his fellow Jewish prisoners have been donated to Yad Vashem, Israel's Holocaust memorial and museum, where researchers can study them and they will be exhibited for public viewing.

They are among the few images that exist of the young men who worked in an infamous secret Nazi operation to produce fake money, fictionalized in the Oscar-winning film "The Counterfeiters." Cytrin's heirs donated them to Yad Vashem at a special ceremony Thursday.

"I think what is amazing when you look at these portraits is how beautiful these young men look," said Yehudit Shendar, the senior art curator for the Jerusalem-based museum, who came to New York City to receive the portraits.

The works will be integrated into Yad Vashem's art collection, and some will be exhibited in Jerusalem in December, along with other portraits created by artists imprisoned during World War II.

Shendar said they belonged to a genre of portraiture by imprisoned artists who sought to document the faces of people who were likely doomed.

The Nazis hand-picked from death camps a group of about 140 mostly skilled craftsmen at the Sachsenhausen concentration camp north of Berlin beginning in 1942, and gave them the dubious choice of creating bogus money for the Nazis or almost certain death. They were isolated away from the rest of the camp in barracks known as Block 19, surrounded by barbed wire.

Initially, the goal of "Operation Bernhard" (named for its lead SS officer, Bernhard Krueger) was to counterfeit millions of British pounds that could be air-dropped on England to undermine the Allied country's economy, but the plan did not work out. The bogus money was also used to finance Nazi espionage.

Lawrence Malkin, the author of "Krueger's Men: The Secret Nazi Counterfeit Plot and the Prisoners of Block 19," said in notes for a 2011 speech that at the height of production in 1943 and 1944, the prisoners were churning out 650,000 fake British notes a month. That amounted to $6 billion or $7 billion in 2011's money, Malkin wrote.

Cytrin was born in what is now Warsaw, Poland, in 1894, and his name appears on a list of "Operation Bernhard" inmates recovered from a lake in Austria, where the Nazis dumped documents about the plot, according to the International Tracing Service in Bad Arolsen.

A toolmaker and engraver, Cytrin was working in Leipzig when he was recruited to the secret plot and made chief of the engraving section, a critical job for the men working and living in Block 19.

Malkin called him one of the dozen or so people who "figured fairly importantly."

"There are people who stand out," he said. "And I'm sure that Cytrin stood out."

In early 1945, the counterfeiters were producing American dollars, but as the Red Army approached the operation was demobilized; the prisoners were sent with the equipment to Mauthausen concentration camp, then to a smaller camp in Redl-Zipf. The prisoners were then taken to Ebensee, to be killed.

But one day their Nazi guards disappeared, and Cytrin and the other members of "Operation Bernhard" were liberated in early May 1945.

Cytrin, who had a brother in the Bronx, came to the U.S. with his wife in 1949 and found his way to New Jersey. His family said Cytrin's attempt to do portraiture professionally fizzled, so he turned to tool and dye-making. He died in 1971.

For many years after he had moved to the U.S., his family said he was suspicious of being watched by the government. The Associated Press has identified Army intelligence documents about Cytrin that remain classified at the National Archives in College Park, Md.

At the ceremony on Thursday, Marcia Friday, who was then married to Cytrin's grandson, said that about 25 years ago she discovered the disintegrating portraits in a cardboard portfolio at the family home in Pennsylvania.

Speaking at the Manhattan offices of the American Society for Yad Vashem, a U.S. organization that supports the Israeli memorial's mission, she said she was moved by how Cytrin was able to render his fellow prisoners' emotions.

"He was able to capture in each of the men's eyes an emotion that is below the external expressions in their faces," she said. "I think the emotions range from numbness to fear to terror."