U.S. Lauds Miqati on His Stance from STL Funding and Syria 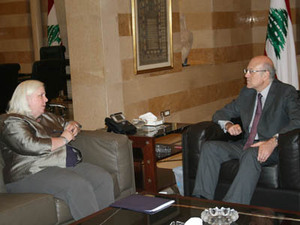 "Lebanon's interest lies in financing the Special Tribunal for Lebanon and the government will act in Lebanon's best interests," Miqati told the pan-Arab daily al-Hayat on the sidelines of the “Friends for Libya” conference held in Paris on Thursday.

"We must separate the situation in Lebanon from that in Syria and refrain from interfering in the affairs of others, so that others will not interfere in our own affairs," he said.

In her remarks to An Nahar, Connelly reiterated that the U.S. will not target Lebanese banks.

She also stressed that Washington does not pressure Lebanon into adopting a stance with or against Syria in terms of the U.S. and European sanctions on the regime.

On Friday, Connelly met with Deputy Prime Minister Samir Mokbel and discussed with him ongoing areas of bilateral cooperation.

An embassy statement said that she stressed the Lebanese government’s obligations to uphold all its international commitments and reiterated the U.S. commitment to a sovereign and independent Lebanon.

LebanonPoliticsUnited States of AmericaWashingtonSyria
Comments 0
Login to leave a comment