Aoun: We Might Call for Negative Stances because We Won’t Give up 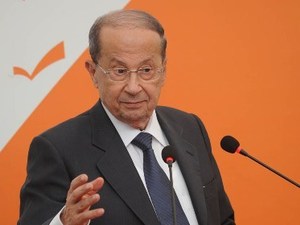 Free Patriotic Movement leader Michel Aoun has said that hatefulness is embodied in al-Mustaqbal movement and slammed parties who supported the electricity plan and then backed off from it.

At a dinner organized by the FPM, Aoun accused some parties of obstructing the movement’s reforms.

“We are determined not to back off from our reform plan, not just that of electricity but of the tax system, maritime property and water projects,” he said.

Aoun defended his son-in-law Energy Minister Jebran Bassil against accusations that he was seeking to siphon off money from $1.2 billion funds aimed at generating 700 Megawatts of electricity if the power plan is approved by the cabinet.

“We are at important crossroads … We hold onto our reform and security approach … We might call for negative stances because we won’t give up.”

The FPM works for a stable and prosperous nation and does not serve another state or embassy, Aoun said.

“If the people are united, no one can vanquish them,” he stated.

Ya Aoun the problem with the electricity is not Mustaqbal. The problem is that no one wants to give your idiot corrupt son-in-law over a billion dollars. Also the biggest problem with the whole electricity problem is that the Shia do not pay. They are beggars that demand that everyone else pay their way or they will kill whomever does not give them what they want. Say it plainly. Everyone must pay. There are 10's of billions of debt built up for Shia electricity in the debt owed by the country. Nasrallah is bankrupting us.

When will that brain tumor explode already?!?!?

dear mr aoun.... do you remember that YOU were part of the last government? you and hezbolah demanded a UNITY government OR you threatened WAR! even as PART of the last government you worked against it on every level and destroyed the government that was forced to embrace you and your evil ways. funny how its not the opposition that is holding up your plans, its your own march 8 government partners. Seems you prefer to rule as a dictator these days and you can simply justify force and war to accomplish your demands. That might work with your friends in Iran, Syria and Hezbollah.... but not in a democratic free Lebanon that we are trying to build .... BUT YOU have prevented that since the civil war and syrian occupation and hezbollah's dominance. Perhaps you are NOT the solution to the PROBLEM but YOU ARE THE PROBLEM.

Aoun: your past, present, and future is full of negative stances. It is the only way you know how to live..... A spiteful conniving person such as you will be remembered as worthless in history.

Ya general, you speak of hatred coming from Al Mustaqbal and every word that comes out of your mouth and those of your cronies is full of nothing but hatred and divisiveness.

Your message never made any sense to any reasonable person, and I am very sure you are hallucinating. However, I can't blame you for being such a power hungry and fixated on the presidency, I blame those sheep who follow you blindly.

Thank you ya General for telling us that Lebanon will remain stable and of course Syria too.

You have no shame...You have dishonored our country and and all of our martyrs.

Your son-in-law has become multimillionnaire in very few years, simon (the guy who could not buy a sandwich in Paris) has built a villa worth 6 M$ on the heights of Jbeil, Alain bought an appartment for 2 M$...all around you are people "recieving money" from "heaven" the "divine" source. You know vey well because all that and you dare talk about reforms, honesty and anti corruption? You have become Number ONE in corruption....!!! Good Bye...we are fed up with your lies !!!

Don't give up Valium either

Keep barking all of you here , GMA tej rasskon , he is inside the government and has the 13 ministers on 30 , while all of you are OUT and rejected , including your corrupted leader saad . PS : You can bark as much as you want , you will only have your bones on time and not before .. and that time WE decide it and nobody else . your days are over ya saad eben rafik .