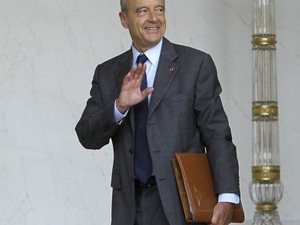 The sources told An Nahar daily that during his meeting with Miqati on the sidelines of the “Friends of Libya” conference on Thursday, Juppe condemned the bombing attacks on UNIFIL troops on May 27 and July 26.

In a meeting with French ambassadors at the end of their 19th conference, Juppe said that he held talks with Miqati. He stressed that Lebanon should benefit from the freedom atmosphere in the region and consolidate coexistence.

The sources said that Miqati informed Ban about Lebanon’s commitment to international resolutions. “I won’t allow Lebanon to fall out of international legitimacy.”

Informed sources also told As Safir newspaper that Miqati stressed during his meetings in Paris that Lebanon wants to stay neutral on the situation in Syria but said Lebanon won’t confront the international community if it decides to take more measures against the regime.

Miqati....they are sending you a message. How embarrassing for you to remain neutral while your Sunni "brothers" are getting slaughtered. You are a disgrace and without honor. You are like Aoun. Both of you have stabbed your communities in the back. Hezbollah knows how to pick traitors from other communities.