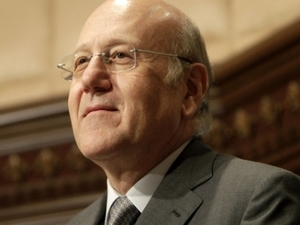 A top U.S. official has said that the Obama administration is adopting a neutral policy towards Premier Najib Miqati because it can’t easily overlook the way he came to power.

The official told pan-Arab daily al-Hayat in Paris, that the U.S. “is adopting neutrality because it knows Miqati since he became prime minister in 2005.”

His government back then made important achievements including parliamentary elections.

But the Obama administration “can’t easily overlook” his appointment which came after Hizbullah and its allies toppled former Premier Saad Hariri’s cabinet and brought Miqati to power, the official said.

“We stand neutral from Najib Miqati because we monitor his movements,” he added. However, neutrality doesn’t mean support for Hizbullah that brought him to power.

The official stressed that the U.S. adopted sanctions against Syrian Ambassador to Lebanon Ali Abdul Karim Ali over the disappearance of several Syrian opposition activists in Lebanon.

The diplomat and the embassy have a responsibility in this regard, he added.

The sanctions imposed by the Treasury Department are the third in a series of punitive U.S. measures placed on Syrian President Bashar Assad and top government officials.

The sanctions on the Syrian regime are “linked to what Assad is doing to its people and not to what he is doing in Lebanon, or Iraq or with Palestinians,” the U.S. official told al-Hayat.

The Obama administration is seeking along with its partners to end the brutality of Assad against its people, he said.

Hizbullah’s political and tactical support for Assad is deepening Sunni-Shiite tension in the region, the official added.