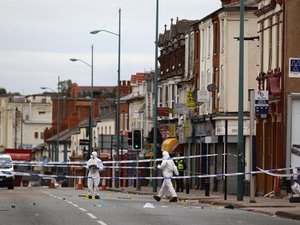 Sheikh Maymun Zarzur, a Lebanese imam, was killed after leading prayers at the Muslim Welfare House in London, the Islamic center said Saturday.

Police said they had arrested a man at the scene on suspicion of murder.

According to a Muslim Brotherhood official in Lebanon, Zarzur is Lebanese and from the southern Iqleem al-Kharoub region. He was in his 40’s.

Zarzur had been the imam at the Muslim Welfare House in north London since 2009.

"Our imam has passed away," the center said on its website.

"It is thought that he was killed inside his office. We would like to send our condolences to all the Muslims in north London and the UK.

"The sheikh was very friendly and never had an argument with anyone in the community during his career in this mosque."

Friday's Fajr prayer is listed on the trust's website as being at 04:38am.

Scotland Yard said they had made one arrest.

"Police were called by London Ambulance Service at 10:21am on Friday to reports of a man seriously injured at Muslim Welfare House in Seven Sisters Road, north London," a spokeswoman said.

The man was pronounced dead at the scene. While detectives await formal confirmation of his identity, they are contacting his family, who live outside Britain. A post-mortem examination is being arranged, the spokeswoman said.

"A man was arrested at the scene on suspicion of murder. At this stage we are not seeking to make any further arrests."

Police have opened an incident room and are appealing for witnesses.

Officers are working closely with the Muslim Welfare House "to reassure the community during this difficult time.

"Inquiries continue to establish the full circumstances and any motive; although we believe the person we have arrested attended the mosque.

"This is not believed to be a race/faith hate crime."

The Muslim Welfare House was founded in 1970 and functions as a community center. It is a registered charity with offices, two training centers, a youth center, a library and prayer rooms for men and women.

The Government should be more responsible in dealing with the matter that touch the Lebanese Abroad...
MrBrain