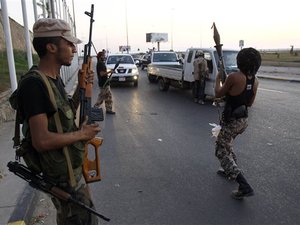 Libyan fighters have given forces in Bani Walid until 08:00 GMT Sunday to surrender, a commander said, adding Moammar Gadhafi's son Saadi was still there but another, Seif al-Islam, had fled.

"The revolutionaries have given an ultimatum to the tribal chiefs in Bani Walid," Abdulrazzak Naduri, deputy chief of the military council in Tarhuna, told AFP.

"Either they raise the white flag of surrender or the fighting begins."

However the head of the National Transitional Council, Mustafa Abdel Jalil, said in Benghazi that a truce declared until September 10 was still in force.

But the most prominent son, Seif al-Islam, had fled two days ago, he said, adding, "God alone knows which road he took."

Abdel Jalil, leader of the provisional administration set up to take over power from the defeated Gadhafi, told a news conference, "We are in a position of strength to enter any city but we want to avoid any bloodshed, especially in sensitive areas such as tribal areas.

"We gave Sirte, Bani Walid... and Sabha one more week.

"This extension does not mean we are unaware of Gadhafi's danger," Abdel Jalil said. "Our forces will move militarily until the end of this extension."

Gadhafi is quickly losing fighters, with many of his new recruits simply handing over their weapons to his foes, a military commander of the new leadership said Saturday.

Abdelhakim Belhaj, head of the Tripoli military council, said earlier that a civilian group ventured into Bani Walid, the Gadhafi stronghold closest to the capital, on Thursday.

They found many of the checkpoints of the city undefended with most guards abandoning their posts in what Belhaj described as a "surprising move."

"We can now say that Bani Walid is open," he said.

Some 600 men aboard 200 combat vehicles moved to within 20 kilometers of Bani Walid without meeting any opposition Saturday, but returned to their base in Misrata, fighters said.