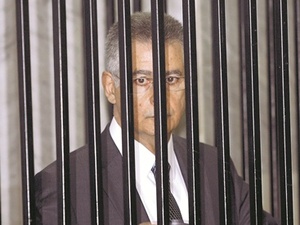 Retired Brigadier General Fayez Karam’s conviction of spying for Israel has demonstrated the credibility of the Internal Security Forces Intelligence Bureau in light of the “harsh political campaign that was launched against it by the Free Patriotic Movement”, reported the daily An Nahar on Sunday.

Informed sources told the daily however that his sentence to two years on charges of collaborating with Israel is short in comparison to other individuals who have been given life sentences for the same charges.

They added however that Karam’s acquittal “would have marked the end of the age of the Resistance and the beginning of the Israeli age, which would have been a major blow to the Resistance’s supporters.”

Furthermore, they pointed out that a major political figure refrained from intervening in Karam’s case “which proves the national credibility of this dangerous affair.”

Karam, a senior official in the Free Patriotic Movement, was sentenced on Saturday to two years in prison on charges of collaborating with Israel.

FPM MP Nabil Nicolas told An Nahar on Saturday shortly after the sentencing that the “development was not a trial, but a premeditated decision.”

“A trial means listening to witnesses and the defense team. Justice does not entail sentencing an individual for actions he did not commit,” he added.

“This was a political sentence and there is no evidence that can convict Karam seeing as the witnesses gave contradictory testimonies,” he stressed.

“However, we believe that the sentence was very light and it encourages people to collaborate with Israel,” he noted.

The military court sentenced on Saturday Karam to three years reduced to two on charges of collaborating with Israel.

Karam was convicted to three years in prison reduced to two years of hard labor for collaborating with Israel according to article 278 sanctions.

The prosecutor also sentenced Lebanese fugitive Elias Karam, who had allegedly introduced Fayez Karam to Israeli officers in Paris, to 10 years in prison in absentia.

Karam, who collapsed when the sentence was read, was also stripped of all civil rights, the source said.

The verdict did not find Karam guilty of spying for Israel, however.

Seven witnesses were called for testimony: two doctors from Dahr al-Basheq hospital, Roumieh prison warden back them and four officers from the intelligence bureau who interrogated Karam.

Akiki demanded the court during trial to implement article 278 from sanctions. While defense attorney Rashad Salamah slammed the preliminary investigations that were taken from his client after using force.

Karam, a senior member of the Free Patriotic Movement, was arrested by the Police Intelligence Bureau arrested in August 2010 on suspicion of spying for Israel.

Karam graduated from the military school in 1972 as lieutenant.

He held several leadership positions in the army, including head of the counter-terror and spying bureau.

He remained in his post until the Israeli invasion of Lebanon in 1982 and his imprisonment in Mazze for five months.

Karam quit the military after then army commander Michel Aoun was exiled to France in 1990.

He returned with him to Lebanon in 2005 when Syria withdrew its troops from the country, ending its 29-year hegemony.

More than 100 people have been arrested on suspicion of spying for the Israeli Mossad since April 2009, including members of the security forces and telecom employees.

Several have since been sentenced to death, including one found guilty of aiding Israel during its devastating 2006 war with Hizbullah.

2 years only, eh! At least it was proven he was collaborating with the enemy.... Wonder how much others knew??

i look to this man as a fellow christian being humiliated & placed behing bars i mean all did mistakes & collaborated with people outside lebanon but why always a specific type of lebanese are dragged to prison? example geagea example aoun example amine gemayel.... all expelled or jailed

hehehehe..... 2 years for a traitor!!!!!! Now the clowns and thugs of the FPM are criticizing the judicial system, the same system they have been advocating to look into Harriri's assassination. What irony.... !

Yeah, Karam just borrowed money from the Mossad..... and Aoun the clown claims this man is innocent.

What about the war criminals, the Syrian spy and Iranian spy networks who still at large unconvicted against the Lebanese people?

being Aoun's best friend dont you think Aoun was also hisn partner in spying for Israel? One wonders how much more HA and Iran paid these guys to switch sides! Welcome to our democracy is style!!!

The enemy of my enemy is my friend. We all want to get rid of the filthy non-islamic militia and it's supporters

Oops.. that makes me an Israel spy...

How many years do I face?

The HIZBUSTAN Criminals and their Allies are the Real enemies of Lebanon. They should be arrested for being "BASIJ" and "SHABBIHA" Agents in Lebanon and for all the MURDERING and STEALING they have commited against the Lebanese People and the State. They are the Real Threat to Lebanon, NOT Israel.

Lady Justice is not blind. She is wearing a burqa

This is a travesty of justice! This man is innocent he was only following orders from his boss Aoun who has a long history or treason and contacts with the Israelis, even his allies is Hezbollah accused him of that! ONE WAY TICKET!

Lebanon proves in two ways that separation of church and state (also known, perhaps, as equal treatment of the laws) is good both for the state and for religion. Lebanon has both rotten government and rotten religions, since its government is "supposed" to make up for the flaws in its religions and the other way around as well.
Try to remember what religion is and what government is. As Thomas Aquinas said, "law is a mandate of reason promulgated by authority for the commn good." Government must be reasonable. Hence the confessional electoral system is not law. Religion is how we know what it means to be reasonable, which means how to fear God. How do you fear God, in the sense of respecting God? You learn to believe your eyes.

If the credibility of the intelligence bureau is based on this, then YA 3EIN on such credibility. Did this guy get three years reduced to two as a WASTA? Either he is a traitor and should get life in prison, or not. What the heck is this joke, 3 years reduced to 2? No evidence, no proof, only fabrications and allegations. tojlit bi tojlit, to say the least, and the superficial Naharte3tir talks about credibility! YA 3EIN. m3alla2in bi 7ibal al hawa.

This is the Comedy of Errors

Is the 2 years in exchange for approval of the Electric plan of Gibran Edison ????

Who asked him to get in contact with the israelis? For which purpose? Think well...it is easy to find out....

Your Valium addict boss will join you soon. Rot in JAIL you Iranian, Syrian, Israeli loser, you served everyone except your own beloved Lebanon. See you in HELL

The Head of Saadnayel Municipality was convicted and sentenced to 15 years for SIMILAR charges...... Karam is backed by Aoun and Hizb of thugs so he only gets a reduced sentence. Even treason in Lebanon is "politicized".....