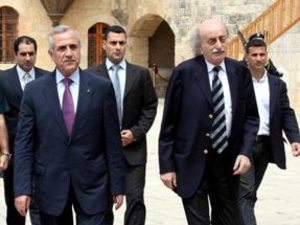 The solution calls for allowing the government to control the funding of the draft law that was proposed by Free Patriotic Movement leader MP Michel Aoun.

It also calls for launching the Electricity Regulatory Authority and allowing Electricite du Liban to play a major role in implementing the law.

Aoun has yet to respond to Suleiman and Jumblat’s proposal, added the daily.

It said that the president will hold talks with Prime Minister Najib Miqati on Monday ahead of the ministerial meeting aimed at finding a solution to the electricity crisis.

Parliament failed to approve an electricity draft law proposed by Aoun that allows Energy Minister Jebran Bassil to receive $1,200,000,000 to implement a project on producing 700 Megawatts of electricity.

The March 14-led opposition says that the draft law gives the minister the freedom to use the amount of money without referring to the cabinet or without any monitoring by the Audit Bureau.

Opposition and National Struggle Front MPs did not vote on the law when it subject to a vote at parliament.

Cabinet is expected to convene on Wednesday to address the electricity file.

Meanwhile, Labor Minister Charbel Nahhas told the Kuwaiti al-Seyassah newspaper in remarks published on Sunday: “We are awaiting the September 7 cabinet session and we will not alter our position on the electricity file.”

“We are committed to Bassil’s plan and we will not back down from it at any cost,” he stressed.

“All claims that a settlement over this file has been reached are baseless because our position is firm and we won’t change it,” he said.

bigdope
as opposed to Aoun taking the whole thing for himself and his family , right .

Point one of any electricity agreement is for the Shia to pay their shar and stop adding to the debt of the country. The Shia must pay or the rest of us should stop.

Wake Up Orange (Guest) over 8 years

Listen everybody mrbean is about to explain to us how the penniless until lately unemployed Gebran iMBassil managed to became a property magnate in five short year.

March 14 losers are jealous that their politicians didn't do a thing for 20 years! March 8 are the only ones that care for the welfare of this country! ONE WAY TICKET!

Mr Brain , please stop posting nonsense and specially a brain that is not yours because you dont seem to have any, and every time you post a comment, seems everybody's IQ just has to get lower to try to understand the meaning of your '' genius '' thoughts, the problem in Lebanon is not about the electricity shortage it is about the treasury that cannot support supplies of electricity to all if a big part of Lebanese dont pay ( like the south and even christians in the north like in ehden ) so this should be all adressed in a neutral manner because shias might constitue a big part of those who dont pay, but so as some christians, so this has to be handled because this is the real problem. After that beeing handled we could even hope for renewable energy ( éolienne ) , if everybody pays, and if the hiz is so concerned about the shias and thinks that are all under their orders, than they should pay for them and they have the money

But most of the time the hezb has only one thing in mind and its a '' fake '' war, they only want Lebanon, they dont give a crap about Israel or palestinians ( that raped and murders shias during PLO days ) . they are just a card for Iran to play with in case they dont agree with Israel and thats it, or else be sure my friend, that they are enjoying very good relationships and even sayyed hassouné admitted that his hezb was infected by spies, and during the 2006 war and before, swaps of soldiers were done via DIRECT negociations , so please tell me how come is this all possible if you hate your ennemy so much? that means just 2 things, either the Hezb are working with them or they are not capable of confronting them as they are present inside the hezb. either way it will be deemed as a fake resistance and that my friend is a logic talk , talking like you do , naming yourself mr brain doesnt give you absolute truth because you are in fact clueless about everything.

Mr Pacific ,
I don't think we are talking on the same IQ wave ...So keep you my name out of the mouth so i keep it the same.
MrBrain