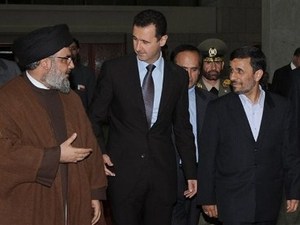 Hizbullah and Iran will not go out of their way in defending the Syrian regime given the international pressure it is being subject to and the likelihood that it will soon be overthrown, diplomatic sources told the daily An Nahar in remarks published on Sunday.

They added that the international pressure on Syria to halt its crackdown against anti-regime protests is also weighing on its allies in Lebanon, especially Hizbullah.

They noted: “The party always resorted to stirring security or military unrest whenever it faced internal pressure … and the situation in Syria is a major cause of concern for it because the regime has and still is its primary supporter in the region.”

However, in light of recent Iranian remarks on the situation in Syria, questions have been raised over whether it and Hizbullah will keep on supporting the Arab state until the very end.

Iranian Foreign Minister Ali Akbar Salehi had stated in late August that the Syrian government should recognize the "legitimate demands" of its people.

The sources said: “Regardless of the extent of its support for the Syrian regime, Iran will not jeopardize Hizbullah’s position in Lebanon.”

“Sacrificing its position is out of the question if it believes that the regime will be overthrown,” they added.

“The West believes that Iran and Hizbullah won’t take suicidal stands towards Syria and they may even have started planning their steps after the fall of the regime even if statements by their various officials indicate otherwise,” stated the sources.

And they will all fall

bigdope, your concerns are in their place the Iranians are already in contact with the Syrian opposition and Hezbollah will always do what the Iranians tell them to do.

It's the beginning of the end for Iran & Hezbollah. Once Syria falls, the Iranian antics will get weakened whether they like it or not.

Opposing Israel doesn't legitimate brutality , tyranny and corruption....
Let me add that we Lebanese has witnessed this brutality and fatal mistakes committed by the Syrians in Lebanon..Unlike many LSM and blind fanatics we don't wish the destruction for Syria...
MrBrain

Good lebanese guy,
I wouldn't be worrying about Syria, your allies Saudi and Israel will fall first.

Looking at these three reminds me of the Three Stooges. Some friends they are to desert their buddy in his hour of need. With friends like that who needs enemies?

One day naharnet has articles claiming that hezbollah and iran are directly helping with the suppression of the protests in syrian and now they come out with the article. gee naharnet, which one is it.

i know that you zionists can't wait for assad to fall.

1. it won't happen
2. even if it somehow happens, it won't change that much. After all, Golan is to be liberated, no matter who's on power in Syria.

by the way, you have demonstrations at home now...much more people than in syria. that means someone should bomb you just like they bombed gadafi!! no, worry there is a rocket for you all