Mubarak’s Trial Postponed as Clashes Erupt Outside, Inside Court 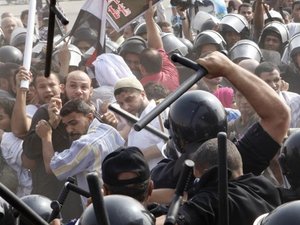 The trial of Hosni Mubarak and his two sons' trial was postponed on Monday after the prosecution and defense lawyers clashed in the court room.

Dozens of the ousted Egyptian president's supporters and opponents clashed near the Cairo court before he arrived on a stretcher.

The session was to hear witness testimony to try to determine who gave the orders for the killing of hundreds of protesters in the revolt that ousted the former autocratic leader in February.

The hearing was to be held off-camera unlike the first two sessions which saw Mubarak appearing in court bound to a stretcher and caged, in gripping images broadcast live on television.

But footage broadcast by state television on Monday showed the 83-year-old again arriving for the hearing at the police academy in the capital's outer suburbs in an ambulance on a stretcher.

Before he drew up, demonstrators clashed near the courtroom.

"We have not abandoned you," the pro-Mubarak protesters chanted, while their rivals shouted, "Punishment, punishment, they killed our children with bullets."

The decision to stop the live television broadcast was taken by trial judge Ahmed Refaat, who was apparently exasperated by the charged atmosphere in the courtroom at the last hearing as an army of lawyers jostled for position.

Mubarak's first dramatic appearance in court came as a shock to Egyptians who were glued to watching the proceedings on television, never having believed he would be forced to go on trial.

After the adjournment of the August 15 session, several relatives of victims and some lawyers jumped on a bench and started chanting "Execution!" at Mubarak as he was wheeled out of the cage.

After the earlier two formal sessions, the court was on Monday to begin questioning to try to determine who gave the order for the shooting of protesters during the January-February revolution.

"The court will hear four witnesses, including the head of communications in the central security force and officers responsible for operations from the same force," the government daily al-Ahram said.

The court would investigate whether the orders to fire on the crowd were given solely by the interior ministry or if Mubarak was also implicated.

More than 850 people were killed in the 18 days that led to Mubarak's ouster after a three-decade rule and thousands more were wounded, according to official figures.

Former interior minister Habib al-Adli is being prosecuted along with Mubarak for suppressing the popular uprising. Those found guilty for the deaths could face execution.

Mubarak's sons Gamal and Alaa are being tried for corruption along with their father. They all pleaded not guilty to the graft charges in the first hearing which was held on August 3.

The former president, who suffers from heart problems and depression, is in custody in a hospital near Cairo, while reports that he was also suffering from cancer have been denied.

His sons are being held in the Tora prison complex on the southern outskirts of Cairo.

A wealthy businessman close to the former presidential clan, Hussein Salem, is being tried in absentia in the same trial.

"We are five Kuwaiti lawyers and have come to defend Hosni Mubarak out of gratitude," she said, referring to the former president's support for Kuwait during its occupation by Saddam Hussein's forces in 1990-1991.

But Egypt's independent newspaper al-Masry al-Youm quoted Justice Minister Abdel Aziz al-Gindi as saying no formal request had been submitted or granted for the Kuwaiti lawyers to take part in the trial.

Mubarak is the most high-profile leader to appear in person in court after having been ousted in this year's "Arab Spring."

Tunisia's ex-president Zine el Abidine Ben Ali, in exile in Saudi Arabia since his overthrow in January, was tried in absentia in Tunisia, while Libya's Moammar Gadhafi has become a fugitive since the fall of Tripoli late last month.

Legal experts say a thorough probe of Mubarak's alleged crimes should have taken several more months, but Egypt's ruling military to which he handed power has expedited the process to mollify protesters

I didn't know where to find this info then kbaoom it was here.