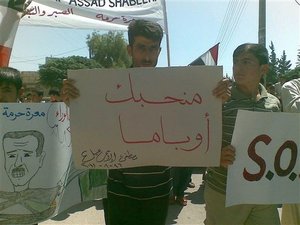 Syrian troops and security forces on Monday launched an assault on the central cities of Hama and Homs, where they shot dead six people, activists said, while at least two were reported killed near the Turkish border.

In Homs two people were killed in the al-Khalidiyeh district and a third in al-Bayyada, while a fourth person was shot dead at Tell Kalakh in the Homs region, Idlibi said.

The Syrian Observatory for Human Rights for its part said a man and his son were shot dead in the Bustan al-Diwan quarter of Homs as they rode on a motor scooter.

The Observatory said 80 people were arrested in al-Khalidiyeh, where reinforcements were sent from Hama with four armored vehicles and seven trucks.

The LCC spokesman also said that in Idlib region in the northwest a sniper killed a man who was trying to cross the border into Turkey.

A Turkish local source in touch with the Syrian community on the other side of the frontier said two people were killed and five wounded in an assault by Syrian troops on the village of Ain al-Beida.

The governor's office in the southern Turkish province of Hatay sent ambulances to the border to pick up wounded people from the incident, Turkish NTV television said, without specifying the number of injured.

Also in Idlib, the LCC said the village of As-Sabil was surrounded and arrests were made.

Near Jabal al-Zawiya in the northwest a grave containing seven bodies was found by locals, who were prevented by the army from retrieving them.

More than 2,200 people have been killed in Syria since almost daily mass protests began on March 15, according to the United Nations, while human rights groups say more than 10,000 people are behind bars.

To the Brave Free pro-democracy Syrian protestors I say, march on, your sacrifices are indeed great but you shall prevail in the end, and the criminal Tyrant that has been slaughtering your men, women, chidren and elderly will get what he and every 21st Century blood thirsty ruthless incoptent corrupt and criminal Dinosaur of a ruler deserves. Beware of the pitfalls you need to stay unitied (Muslims, Christians, Alwaites), after the Tyrannical Assad family falls, Syria should be for ALL Syrians with no excpetions, because if the 40-year reign of terror of the Assads has proven anything, it's that a pluralistic society such as that of Syria just like Lebanon, Iraq, Egypt... and the rest can only be ruled with concensus and the honoring of the people's will, and constant development and education of the people and country to embrace the 21st century free world and be part of it rather than become a rogue decaying Dictatorship (be it stalinist of so called "religious") where all abuses.

Great photo.
The "DIVINE" Iranian republic supports and aids the butchering of the Syrian people while the "GREAT SATAN" , America, defends the innocent and brave Syrians.
Hopefully the syrian people will remember who stood by them and who stood by their criminal regime.

There must be more than 8 Sunni fundamentalists of Al Qaeda. It's only a matter of time before they all get terminated. Hopefully this will happen sooner than we expect, unless they cross the border into Lebanon and join their filthy brothers, Hariri's Al Qaeda - Akkar and Tripoli Brigades and his Christian Sunnis.

A note on the picture: it shows that the Sunni fundamentalists in Syria are just as dumb as their brothers in Lebanon. HEY, LOSERS, not even the Americans love Obama, the biggest loser and one-term president. He turned out to be even dumber than the dumbest president and friend of the idiots in Lebanon, G. W. Dumbo Bush. This is so laughable it is pathetic.