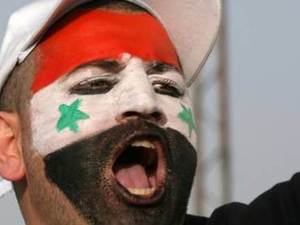 Tehran reiterated its hope Monday that the crisis in Syria, its main ally in the region, could be resolved "through dialogue and not violence."

Iran "is certain that the Syrian people and the government have the capacity to gain national development through dialogue and refraining from any violence," Hassan Ghashghavi, deputy foreign minister in charge of consular affairs, was quoted as saying by the official IRNA news agency.

The U.N. says the anti-Syrian regime protest which started around mid-March has left at least 2,200 dead, most of them civilians.

Iran is concerned about the possible collapse of its principal ally in the Middle East and has never condemned the violence of the regime in Damascus in suppressing mass protests.

It accuses its traditional foes of Israel and the United States of stirring up trouble in Syria.

"We condemn any kind of foreign provocation and intervention especially designed by the Zionists and the Americans which has no aim but to weaken the resistance front," Ghashghavi said.

He also renewed criticism of the military intervention of Saudi Arabia and United Arab Emirates in Bahrain to help the Bahraini Sunni monarchy suppress a Shiite-led protest.

"Some regional nations by sending around 12,000 troops have practically violated this nation's independence and sovereignty... we believe that one Bahraini, one vote will prevail against foreign intervention... this is the best way to preserve Bahrain's national sovereignty," he said.

Nice mugs, the mug that could fit Walid Muallem's mug would probably have to be the size of a cask at the very least..