Monsoon Kills More than 100 in Pakistan 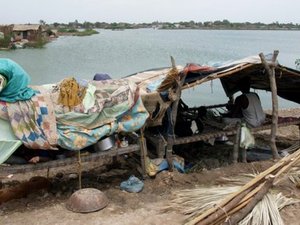 Monsoon rains in Pakistan have killed more than 100 people in a month and destroyed crops and houses in the flood-prone south of the country, provincial government officials said on Monday.

Some 2.2 million people have been affected and 300,000 displaced, said Sajjad Haider Shah, an official at the disaster management authority in the southern province of Sindh.

He said that most of the victims were killed as a result of falling roofs, drowning in flood waters and water-borne diseases.

"Since August 11, when the first spell of rains started, 46 people were killed while 90 more have died since August 27," Shah said.

"The victims include women and children whose details are being gathered," he added.

Two senior Sindh government officials confirmed that more than 100 people had died as a result of the rains.

The first spell of rain mainly affected seven southern districts of the province, while an ongoing second spell has hit the entire province, except its capital Karachi, said Shah.

"We are providing tents and food to the people and our supplies are getting better every day."

Charities have accused Pakistan of since failing to invest in flood prevention measures.