Iran to Give IAEA 'Full Supervision' if Sanctions Lifted 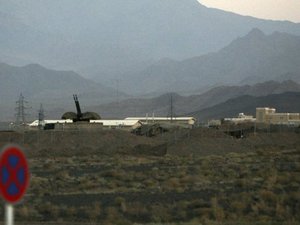 Iran is ready to give the International Atomic Energy Agency "full supervision" of its nuclear program for five years if U.N. sanctions are lifted, its nuclear chief said in remarks published Monday.

"We have proposed that the agency keep Iran's activities and nuclear program under full supervision for five years, providing the sanctions are lifted," the nuclear chief, Fereydoun Abbasi Davani, told ISNA news agency.

Iran is targeted by four sets of U.N. Security Council sanctions over its refusal to suspend uranium enrichment amid fears in the West that it seeks to build a nuclear bomb -- a charge it vehemently denies.

Abbasi Davani neither said when the offer was made to the IAEA, nor what he meant by "full supervision."

Much of Iran's nuclear activities are already under the control of the IAEA, including uranium enrichment -- a process which can both produce the fuel for a nuclear reactor and the fissile material for an atomic warhead.

The IAEA said in a confidential report, a copy of which was obtained by Agence France Presse on Friday, that it is "increasingly concerned about the possible existence in Iran of past or current undisclosed nuclear related activities involving military related organizations."

These included "activities related to the development of a nuclear payload for a missile", according to the report, which is due to be discussed by the IAEA's 35-member board of governors at a September 12-16 meeting.

But Abbasi Davani said such allegations are "baseless and fabricated."

The agency has for years criticized Tehran for refusing to answer a number of questions about its nuclear program, and for denying access to certain sites, including the heavy water reactor Iran is building in the central city of Arak.

Who do these guys think they're fooling?? They've been playing aroun for too long, sending unempowered negotiators to Vienna, fiddling with the aganda of the planned meetings, revealing unreported enrichment plants when. It's been uncovered anyway and they stand nothing to loose, rather gain something in pretending they're cooperating! No these guys and their surrogates understand the language of brutal force only. When they'll hear the hundreds of missiles raining on them, they'll understand the game is over.You don't rub shoulders with the international community lead by the only superpower left, with impunity! We'll soon know who the are men and who are the boys!

More BS from the Iranian criminal regime, they will agree for inspections the IAEA will go in be sent to sites that have been vacated or "dummy" sites they will ask to see the real sites, the Iranian regime will suspend cooperation, the IAEA will leave the regime will alter the set up... pressure mounts... the regime will accept the IAEA will move in they will be sent to other dummy sites.. they will insist on seeing the real ones... Iran will suspend cooperation .... move rods around again.... pressure mounts... the Iranian regime accepts the IAEA moves in and is taken to other dummy sites IAEA demands to see other real sites, the regime suspends cooperation..... (you get the picture) meanwhile weapons grade uranium is enriched in other underground places in Iran and the like of North Korea. The international community has been jerked around for such a long time that any credibility given to the Iranian regimes invites ... (continued)

.... are a waste of time, resources and valuable time that threatens Security in the ME and the wider world (due to the threat of further proliferation). The international community knows what it needs to do to deal with this rogue Iranian regime threat which is growing exponentially by the day. Enough procrastinating already...!!