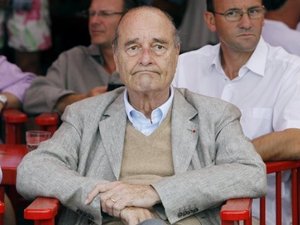 Jacques Chirac's embezzlement trial opened Monday with the 78-year-old former French president absent after a medical report said he suffered from memory loss and was too unwell to attend.

"Absent," came the reply when the presiding judge called out his name at the start of a trial that should have seen the first French former head of state in the dock since World War II.

Judge Dominique Pauthe was expected to begin proceedings by responding to the medical report. His options include postponing the case, seeking further medical opinion, or continuing hearings with Chirac represented by lawyers.

Chirac, best known internationally for his opposition to the 2003 U.S.-led invasion of Iraq, has been linked to a series of corruption scandals but was never convicted.

The right-winger stands accused of illegal party funding ahead of his successful 1995 presidency bid.

If found guilty, he faces up to 10 years in jail and a fine of 150,000 euros ($210,000) on charges that include embezzlement and breach of trust during the years he served as mayor of Paris.

Chirac is the first French former head of state to face criminal charges since the leader of the collaborationist wartime regime, Marshal Philippe Petain, was convicted of treason after World War II.

He enjoyed immunity from prosecution as president from 1995 to 2007, but the case, which has already seen current Foreign Minister Alain Juppe convicted, has finally caught up with him.

He is accused on two counts of paying members of his political party for non-existent municipal jobs in Paris, where he was mayor from 1977 to 1995.

Chirac, who became France's best loved politician after leaving office in 2007, avoided the dock in March when lawyers for a co-defendant won a postponement by arguing that certain charges were unconstitutional.

It appeared that he might again avoid trial after his lawyers said in a statement Saturday they had submitted a medical report to the presiding judge that said he was medically unfit to attend.

"President Chirac indicated to the court his wish to see the trial proceed to its end and his willingness to assume his responsibilities, even though he is not entirely capable of taking part in the hearings," they said.

The neurological report drawn up at the request of his family concluded that Chirac was in "a vulnerable condition which will not allow him to answer questions about his past," Le Monde newspaper said on Saturday.

Another French newspaper on Sunday named the condition as "anosognosia," which is defined as being unaware of the disabilities one has.

Chirac's son-in-law Frederic Salat-Baroux said Saturday that the ex-president's health "has been getting worse for several months" and he "no longer has the memory" to attend the court hearings.

At the start of the year his wife Bernadette denied that Chirac was suffering from Alzheimer's disease.

State prosecutors had called for the case to be dismissed, raising the likelihood that Chirac will avoid conviction if his case does go ahead.

Paris city hall last year dropped its civil charges against him in return for a payment of more than 2.2 million euros, from him and the right-wing UMP party.

Chirac, who on top of his 12 years as president has also served two terms as prime minister, paid more than half a million euros of this from his own pocket but did not acknowledge any wrongdoing.

Despite his legal problems, Chirac is much loved by the French who seem nostalgic for his warm manner and love of good food and beer, and his traditional style of statesmanship, which contrasts with the brash energy of his successor Nicolas Sarkozy.

God bless you Jacques Chirac. Few people remember that we owe him single handedly the idea of the STL! They should give his name to the boulevard running behind the Camille Chamoun stadium and remove the H Assad renegade 's name from it!! That'll come sooner than later, the same way Ceaucescu's name disappeared from public building's!