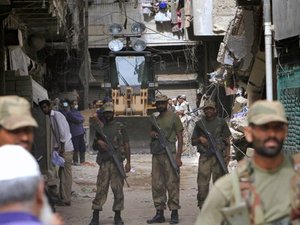 A senior al-Qaida leader believed to have been responsible for planning attacks on the U.S., Europe and Australia has been arrested in southwest Pakistan, the army announced on Monday.

Younis al-Mauritani was picked up in the suburbs of the southwestern city of Quetta along with two other high-ranking operatives for the global terror network, the military said in a statement.

Cooperation between the CIA and Pakistan's Inter-Services Intelligence agency led to the arrests by the paramilitary, it said, without saying when Mauritani was detained.

"In an intelligence-driven operation by Inter-Services Intelligence in coordination with Frontier Corps Balochistan, a senior al-Qaida leader, Younis al-Mauritani, mainly responsible for planning and conduct of international operations, was nabbed," the statement said.

"Al-Mauritani was tasked personally by Osama bin Laden to focus on hitting targets of economical importance in the United States of America, Europe and Australia," the army said.

The army named the two other senior operatives as Abdul Ghaffar al-Shami and Messara al-Shami.

Mauritani does not feature on either the U.S.' FBI list of most wanted terrorists or the U.S. Treasury Department's own list of global terrorists.

But Western intelligence officials from two separate countries confirmed Mauritani was part of al-Qaida's top team in Pakistan, and linked to threats against Europe.

"If it's confirmed, it's a good catch," said one Western intelligence source.

Despite recent breaks in the relationship between U.S. and Pakistan's spy networks following the U.S. covert killing of al-Qaida leader Osama bin Laden in Pakistan in May, the army heralded the cooperation that led to the arrests.

"This operation was planned and conducted with technical assistance of United State Intelligence Agencies with whom Inter Services Intelligence has a strong, historic intelligence relationship," the military said.

The report comes one week after U.S. officials claimed to have killed the al-Qaida second-in-command near the Afghan border in Pakistan.

But Pakistani security officials have expressed doubt over the report that Atiyah Abdul Rahman had been killed in the northwest tribal area of Waziristan -- an area that Washington has called the global headquarters of al-Qaida.