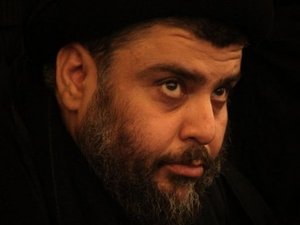 Anti-U.S. Shiite cleric Moqtada al-Sadr said on Monday he is giving the Iraqi government a "last chance" to implement reforms, or popular demonstrations would be called.

"This is the last chance before setting a date for open, peaceful, popular demonstrations," Sadr said in a statement released by his office in the holy city of Najaf, without specifying how much time he was giving the government.

Sadr called on the government to give all Iraqis a share of the country's oil wealth, create jobs for 500,000 unemployed people nationwide, and provide free fuel for private generators, until Iraq's destitute electricity sector is improved.

"If these demands are achieved without delay ... the open demonstration will be postponed indefinitely," Sadr said.

The only way to target all of these murderous terror organizations, is to target and terminate the mother ship i.e. the Iranian Supreme Criminalls regime in Tehran, confronting these terrorist entities seperately, is like hacking at the branches of the evil tree of terror (more braches will grow in their place, which will only play into the hands of the Iranian regime as it intends to use sacrificial pawns (like Nasrallah, Sadr...) to destroy the host country so it can grow more zombie pawns in Quom and send them over to pick up the pieces and blame the destruction on "Israel" the "West" the "Zionists" the "Marsians", "ET", "mickey mouse", "bugs bunny") and rally their zombie masses accordingly, one has to uproot this evil tree of terror all together and the roots are in Tehran and Quom... The more the free world waits the deeper the roots will spread and everyone will be worse off for it... Time to ACT!!!

How is a man calling for the distribution of wealth, jobs and subsidiaries for gas products considered a terrorist?! I mean, he is doing exactly what Obama has been doing for the last 2 or 3 years!

I think this zionist state of yours is having you portray their point of view, but you are just failing at making any kind of sense!

Seriously, re-read the article, and don't just blab stuff, but rather tell me how any of the things this guy is saying are wrong?!